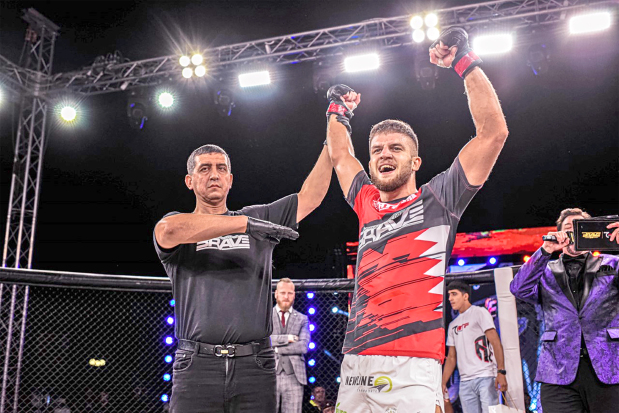 Ismail Naurdiev is ready for the Super Welterweight World Title, the fighter has said after proving yet again at BRAVE CF 59 that he has something special.

The Austrian (22-5) captured not only the fight purists’ attention with a near-perfect performance that ended in an electric TKO win over Kyrgyzstan’s Bekten Zheenbekov (5-1), but he too grew his global fan base with his stage presence and magnetic charisma.

Speaking to BRAVE CF commentator Phil Campbell post-fight, the man known as the Austrian Wonderboy, succinctly shared his joy on Uzbekistan’s BRAVE CF debut and went on a memorable promo to further prove his point as the number one contender at Super Welterweight.

When asked where that ruthless finish came from, Naurdiev – usually quick with a barb – was once again true to form.

“Because I am the best, that is why. Where is the question, brother?”

Naurdiev’s BRAVE CF 59 Super Welterweight bout was listed as a potential Number One Contender fight for the division’s belt and he grabbed the opportunity with both hands, landing a memorable performance and his first finish for BRAVE CF.

He made his promotional debut back in April of 2021, challenging the then-champion Jarrah Al Silawi in the main event of BRAVE CF 50. After a disappointing loss, he came back with a vengeance, beating Olli Santalahti at BRAVE CF 54 – in a bout that won the 2021 BRAVE CF Fight of The Year Award. Now, with a second straight win, he seems poised to fight for the currently vacant title.