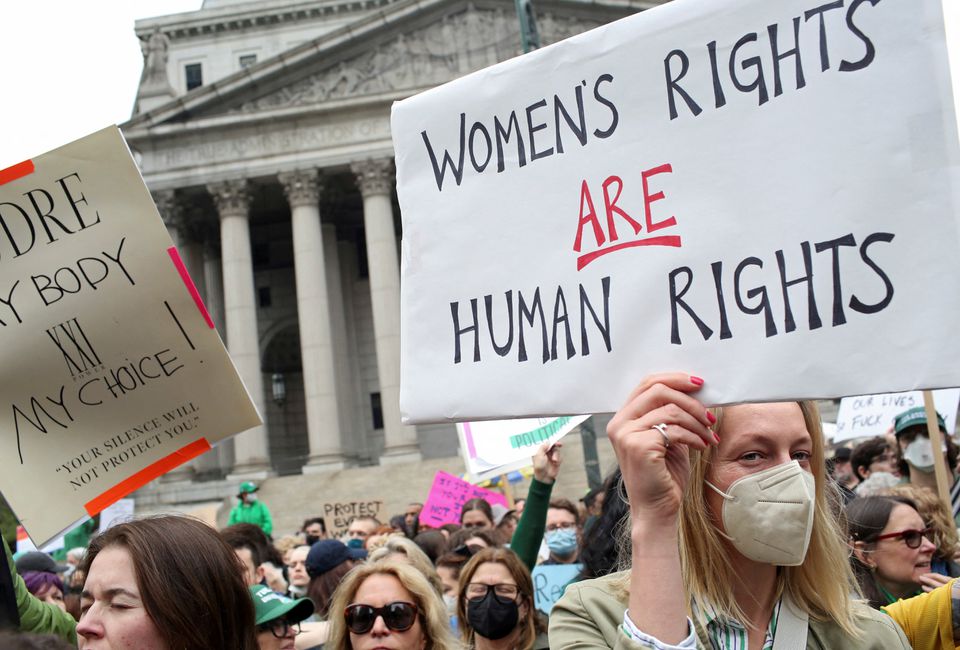 People protest after the leak of a draft majority opinion written by Justice Samuel Alito, preparing for a majority of the court to overturn the landmark Roe v. Wade abortion rights decision later this year, in New York City, U.S., May 3, 2022. REUTERS/Yana Paskova/File Photo

Hundreds of protesters descended on the US Supreme Court to denounce the justice’s decision to overturn the half-century-old Roe vs Wade precedent that recognised women’s constitutional right to abortion.

The sweeping ruling by the court, with a 6-3 conservative majority, was set to vastly change American life, with nearly half the states considered certain or likely to ban abortion. Conservative Justice Clarence Thomas suggested the court’s reasoning could also lead it to reconsider past rulings protecting the right to contraception, legalising gay marriage nationwide, and invalidating state laws banning gay sex.

He added that the White House would look to police how states enforce bans, with administration officials having already signalled they plan to fight attempts by states to ban a pill used for medication abortion.

“The decision is implemented by states,” Biden said. “My administration is going to focus on how they administer and whether or not they violate other laws.”

Christian conservatives had long fought to overturn Roe, with Friday’s ruling a cherished win that was the result of a long campaign to appoint anti-abortion justices to the top court. The ruling had the support of all three justices appointed by former President Donald Trump.

It is at odds with broad public opinion. A Reuters/Ipsos poll last month found that about 71 per cent of Americans – including majorities of Democrats and Republicans – said decisions about terminating a pregnancy should be left to a woman and her doctor, rather than regulated by the government. That support is not absolute: 26pc of respondents polled said abortion should be legal in all cases while 10pc said it should be illegal in all cases, with the majority supporting some limits.

The ruling will likely influence voter behaviour in the November 8 midterm elections, when Biden’s Democrats face a high risk of losing their razor-thin majorities in the House of Representatives and possibly the Senate.

The White House on Saturday said it would challenge any efforts by states to restrict women’s ability to travel out of their home state to seek an abortion.

The case that led to the decision revolved around a Mississippi law that bans most abortions after 15 weeks of pregnancy, before the fetus is a viable outside the womb.