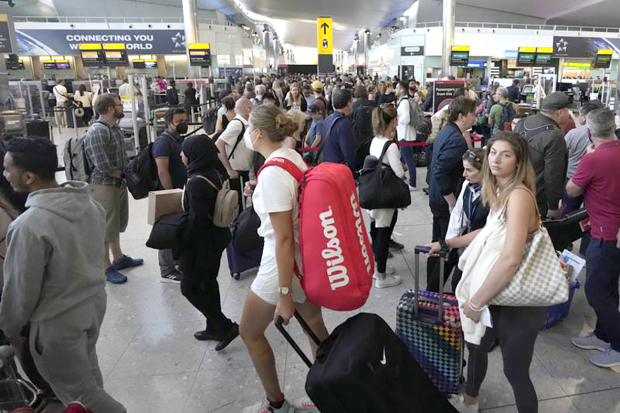 LONDON: Holidaymakers are facing more travel disruption as airlines prepare to announce a new wave of cancellations next week and new strikes are planned in Spain.

Ryanair crew based in Spain plan to strike for 12 days this month to demand better working conditions, unions have said.

The announcement came on the final day of the crews’ current strike, which began on Thursday and forced Ryanair to cancel 10 flights yesterday.

It comes as Britain’s busiest airport Heathrow has to tell officials about any further flight cancellations by Friday – just as some schools begin breaking up for the summer holidays, according to The Daily Telegraph.

The upheaval is in response to an amnesty announced last month that will allow airlines to cancel flights while still retaining take-off and landing slots next year.

Flights were delayed at Heathrow Airport yesterday after a technical fault with the airport’s fuelling system.

A passenger travelling through Heathrow described the scene at baggage claim as looking like “a disaster movie”.

The government reportedly ruled out drafting in the military to help at UK airports after Ireland put the army on standby to assist in case of further disruption at Dublin.

Ryanair’s next industrial action in Spain will see cabin crew strike on 12-15 July, 18-21 July and 25-28 July across the 10 Spanish airports where Ryanair operates, according to unions.

Spain-based cabin crew at easyJet are also striking for nine days this month for higher pay.

A Heathrow spokesman told Sky News: “A technical fault with the airport’s fuelling system has now been resolved.

“We are working with all airport partners to minimise disruption, however flights out of Heathrow this afternoon may be subject to delays.

Scores of ground staff protested in front of one terminal to demand a big pay rise to cushion the pain of high inflation, emboldened by booming demand for air travel and staff shortages caused in part by the Covid-19 pandemic.

Queues built up inside the terminals as some passengers sought to make alternative arrangements and others arrived early fearing disruption.