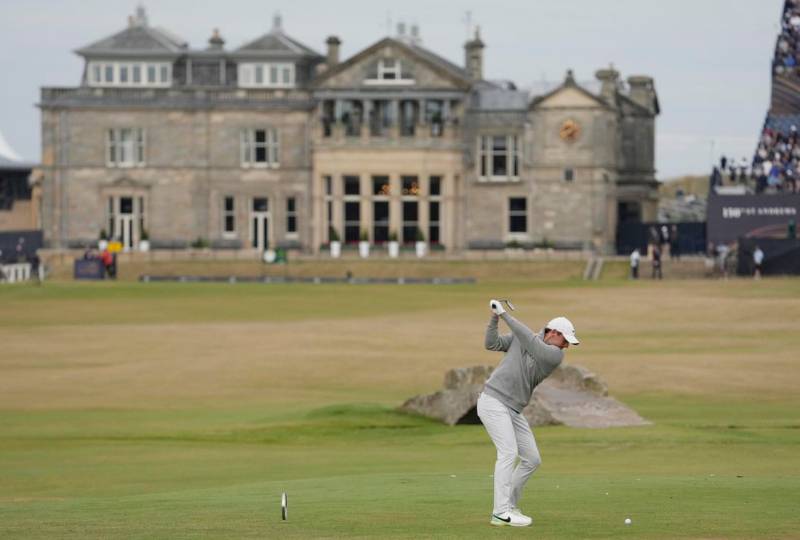 FILE PHOTO: Rory McIlroy hits his tee shot on the 18th hole during the third round of the 150th Open Championship golf tournament. Reuters Photo.

ST ANDREWS: An excited record crowd poured into rainy St Andrews on Sunday for the climax of the 150th British Open that appeared to be heading towards a matchplay-style showdown between Northern Ireland's Rory McIlroy and Norway's Viktor Hovland.

Tied four shots clear at the top of The Open leaderboard, the final pair will tee off at 1450 local time (1350 GMT) with rain expected to give way to sunny skies.

While the chasing pack will need to produce something special to catch the leaders, they have demonstrated through three rounds on the Old Course that it is possible.

American Cameron Young and Australia's Cameron Smith, who have both posted the low rounds of the tournament with 64s, start four strokes behind, with world number one and Masters champion Scottie Scheffler one further adrift alongside South Korea's Kim Si Woo.

Lurking menacingly six back is former world number one Dustin Johnson, who jumped to the LIV Invitational Golf Series earlier this year and will be their best chance of grabbing the Claret Jug.

Paired together for Saturday's third round, four-times major winner McIlroy and Hovland, one of golf's emerging young talents, thrilled the crowds with a spectacular display of links golf in matching rounds of 66.

More of the same is expected on Sunday as the 33-year-old Northern Irishman bids to end an eight-year major drought while the 24-year-old Hovland looks to become the first Norwegian to win a major title.