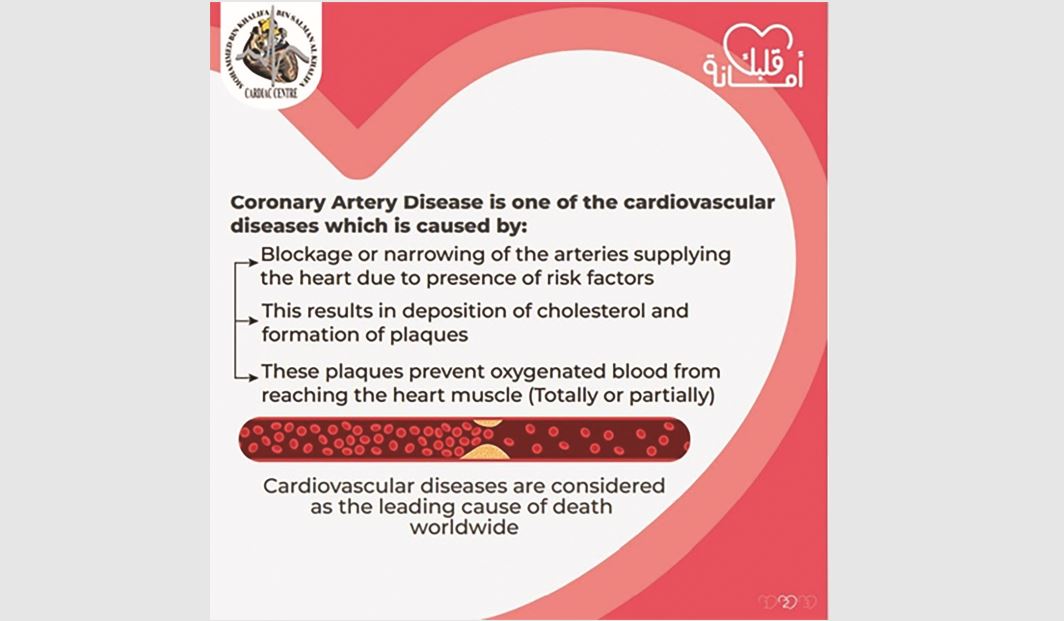 An infographic released as part of the campaign yesterday

A MAJOR awareness campaign has been launched to promote cardiac care and early intervention in case of acute heart attacks.

It is part of national efforts to provide high-quality and sustainable healthcare to guarantee the safety and well-being of all citizens and residents, the cardiac centre’s chief executive, Major General Dr Fuad Abdelkader Saeed, said.

The centre had launched a National Acute Heart Attack Programme in January this year with the aims of treating acute heart attacks patients with emergency surgeries, thus saving lives and decreasing potential disabilities.

More than 400 patients, both national and expatriates, have undergone emergency surgeries since the launch of the programme.

The ‘Treasure Your Heart’ campaign aims to support the programme by providing information about heart disease and helping raise awareness about the risk factors and the best ways to treat and prevent them.

“The campaign will shed light on the symptoms and signs of a heart attack and what needs to be done when someone has them,” Dr Saeed said.

He stressed that it is essential for all patients with such symptoms to seek help from Emergency Services through the National Ambulance service.

This will help death rates and complications that accompany heart attacks, especially if care is given within two hours of the onset of symptoms, the medic pointed out.

The GDN reported earlier that an emergency medical protocol that was rolled out in Bahrain earlier this year has already saved lives. The ST-elevation myocardial infarction (Stemi) protocol, initiated at the cardiac centre has proved vitally important.

‘Code Stemi’ is used in hospital emergency departments to indicate that a patient is suffering from an acute heart attack and requires immediate treatment. With the activation of the code the hospital jumps into action ready with a life-saving team and equipment to attend to the patient.

During a heart attack, tissue in your heart muscle dies due to lack of blood flow through your heart’s arteries. A heart attack occurs when the flow of blood to the heart is blocked.

Cardiovascular disease is the leading cause of death worldwide. In Bahrain, however, there is no official data. Experts in the field had called for the establishment of a national centre for cardiac research to aid in the fight against the disease.