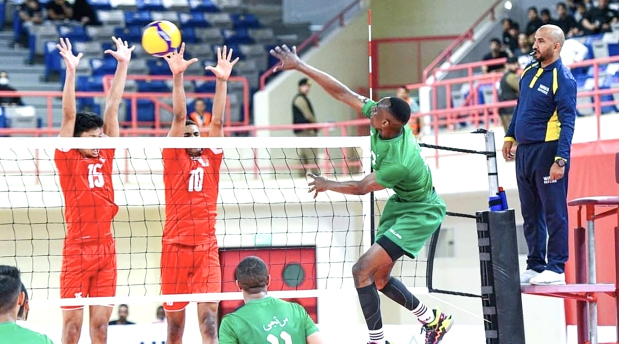 Bahrain players (in red) try to block a smash

Saudi Arabia put on a masterclass last night as they defeated Bahrain 3-0 in the final of the first West Asian Junior Volleyball Championship 2022 to lift the trophy in front of an ecstatic home crowd in Qatif.

Unbeaten throughout the tournament, the Saudis were dominant from the start and raced to a 2-0 lead in the five-set game with the Bahrainis needing to win the third set to stay in the contest.

For a brief while, it appeared that Bahrain might actually be able to achieve that goal as they managed to gain a five-point lead, at 20-15, needing only five more points to reach the magic figure of 25 which would have enabled them to win the set and take the game further.

But the Saudis switched gears and scored five points in no time to draw level at 20-20. Soon, they had edged ahead at 22-20 and, although Bahrain drew close one last time at 22-23, the Saudis scored two more points quickly to make it 25-22 and clinch victory, sparking wild celebrations in the stands.

Earlier, a determined Bahrain team tried to keep their opponents in check in the first set by managing to draw level every time the Saudis took the lead. Eventually, the Saudis pulled in front one final time to win it 27-25.

Even though Bahrain tried to make a comeback of sorts by adding eight more points, the lead they had conceded meant that, even with a drop in the frequency of their scoring, the Saudis managed to win the set quite comfortably at 25-18.

The stage was now set for Bahrain to try and launch a spectacular fightback. But it was not their night and they watched dejectedly as the Saudis celebrated a well-deserved triumph.