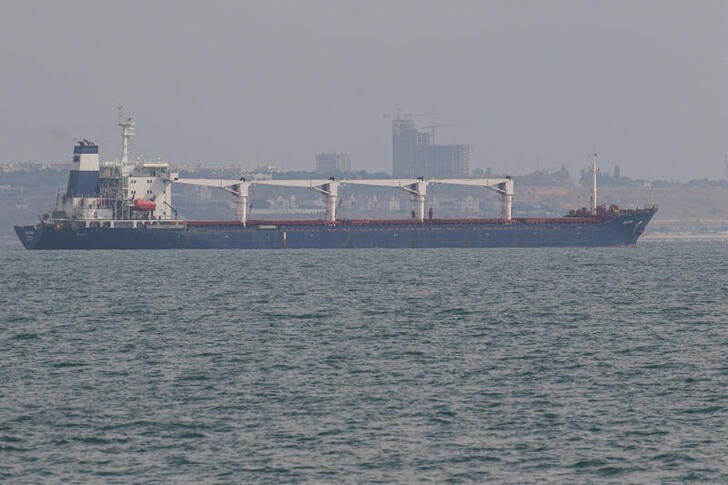 Forensic anthropologists walk into a property to look for human remains in a damaged vehicle as the McKinney Fire burns near Yreka, California, US, August 1, 2022. (Reuters Photo)

ISTANBUL/LONDON - Russia on Tuesday accused the United States of direct involvement in the Ukraine war while the first ship carrying Ukrainian grain to world markets since Moscow's invasion anchored safely off Turkey's coast after a problem-free journey.

Russia said it was responding to comments by Vadym Skibitsky, Ukraine's deputy head of military intelligence, about the way Kyiv used US-supplied long-range HIMARs rocket-launch systems based on what he called excellent satellite imagery and real-time information.

Skibitsky told Britain's Telegraph newspaper there was consultation between US and Ukrainian intelligence officials before strikes and that Washington had an effective veto on intended targets, though he said US officials were not providing direct targeting information.

Russia's defence ministry, headed by a close ally of President Vladimir Putin, said the interview showed that Washington was entangled in the conflict despite repeated assertions that it was limiting its role to arms supplies because it did not want a direct confrontation with Moscow.

"All this undeniably proves that Washington, contrary to White House and Pentagon claims, is directly involved in the conflict in Ukraine," the Russian defence ministry said in a statement.

"It is the Biden administration that is directly responsible for all Kyiv-approved rocket attacks on residential areas and civilian infrastructure in populated areas of Donbas and other regions, which have resulted in mass deaths of civilians."

There was no immediate reaction to the ministry's allegations from the White House or Pentagon.

Ukraine and the West accuse Russia of carrying out devastating missile attacks on civilian targets on an almost daily basis. Both sides deny deliberately targeting civilians.

Deliveries of sophisticated long-range weapons systems from Western nations to Ukraine are seen as vital if Kyiv's forces are to turn the tide of the war, in which Russia relies heavily on long-distance bombardments of urban areas.

Russia's verbal attack on Washington came after Turkey said that the first ship carrying Ukrainian grain since Russia's invasion blocked exports more than five months ago was on track to arrive safely in Istanbul on Tuesday night.

The vessel, the Sierra Leone-flagged Razoni, safely anchored at the entrance to the Bosphorus Strait, which connects the Black Sea to world markets, at around 1800 GMT, some 36 hours after departing from Ukraine's major port of Odesa.

The Razoni's departure under a July 22 safe passage deal has raised hopes of further such departures, which could help ease a burgeoning global food shortage.

Loaded with 26,527 tonnes of corn, the ship was to be inspected by Russian, Turkish, Ukrainian and U.N. officials from the new Joint Coordination Centre at 0700 GMT on Wednesday before continuing to its planned final destination, the Lebanese port of Tripoli, according to Turkey's Defence Ministry.

"The plan is for a ship to leave...every day," a senior Turkish official told Reuters, referring to Odesa and two other Ukrainian ports covered by the deal. "If nothing goes wrong, exports will be made via one ship a day for a while."

The United Nations has warned of the risk of multiple famines this year because of the war in Ukraine.

Monday's sailing was made possible after Turkey and the United Nations brokered a grain and fertiliser export agreement between Russia and Ukraine - a rare diplomatic breakthrough in a conflict that has become a drawn-out war of attrition since Russian troops poured over the border on Feb. 24.

Ukrainian President Volodymr Zelenskiy called the Razoni's departure "the first positive signal" but warned it was too early to predict how things would play out.

"We cannot have illusions that Russia will simply refrain from trying to disrupt Ukrainian exports," he said.

For the safe passage deal to stick, there are other hurdles to overcome, including clearing sea mines and creating a framework for vessels to safely enter the Ukraine conflict zone and pick up cargoes.

Known as Europe's breadbasket, Ukraine hopes to export 20 million tonnes of grain held in silos and 40 million tonnes from the harvest now under way, initially from Odesa and nearby Pivdennyi and Chornomorsk, to help clear silos for the new crop.

Russia and Ukraine accuse each other of laying mines that now float around the Black Sea and represent a hazard to shipping.

Russia has called the Razoni's departure "very positive" news. It has denied responsibility for the food crisis, saying Western sanctions have slowed its exports.

Adding to those sanctions, the United States on Tuesday targeted Alina Kabaeva, a former Olympic gymnast the Treasury Department described as having a close relationship with Putin. Putin has denied they are romantically linked.

The Treasury Department said in a statement Kabaeva heads the National Media Group, a pro-Kremlin group of television, radio and print organizations. The sanctions also target Publichnoe Aktsionernoe Obschestvo Magnitogorskiy Metallurgicheskiy Kombinat (MMK), one of the world's largest steel producers, as well as the majority owner and chairman of the board of directors, Viktor Filippovich Rashnikov, the Treasury said.

In Moscow, Russia's top court designated Ukraine's Azov Regiment a terrorist group, a Reuters correspondent in the courtroom said, paving the way for captured soldiers to be tried under tough anti-terror laws and be jailed for up to 20 years.

The Azov Regiment, which has far-right and ultra-nationalist roots, has been one of the most prominent Ukrainian military formations fighting Russia in eastern Ukraine. Having begun as a paramilitary unit to take on pro-Russian separatist rebels in 2014, it was later integrated into Ukraine's national guard.