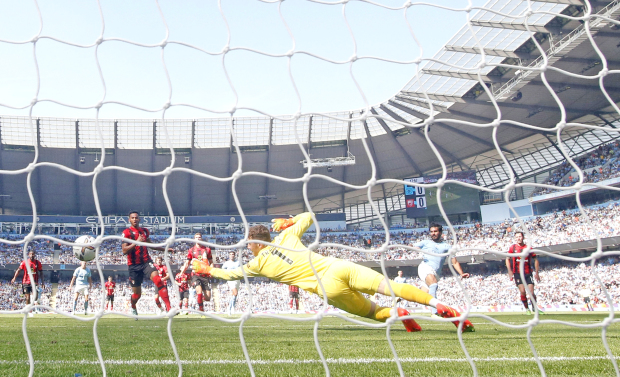 Arsenal joined them on six points as former City striker Gabriel Jesus struck twice in a 4-2 win over Leicester City.

Leeds United looked on course for a second successive win but squandered a two-goal lead to draw 2-2 with Southampton – one of three draws on a sultry afternoon.

A shambolic Manchester United side conceded four goals in the opening 35 minutes in a 4-0 drubbing at Brentford on Saturday as their woeful start to the Premier League season continued.

United’s seventh successive away league defeat was assured long before the interval as Brentford took ruthless advantage of a catalogue of errors by the visitors.

City, bidding for a fifth Premier League title in six seasons, cruised to an opening win at West Ham United and were equally dominant against Bournemouth.

They wasted no time getting into their stride in the sunshine as Norway striker Erling Haaland marked his home debut with an assist for Ilkay Gundogan’s opener after 19 minutes.

City then cut loose and scored a sumptuous second 12 minutes later when Kevin De Bruyne curled a fine strike into the net with the outside of his foot.

Phil Foden added another before halftime from De Bruyne’s assist and it was just a matter of how many more the hosts would help themselves to. In the end they only managed one more courtesy of Jefferson Lerma’s own goal but they spent most of the second half on cruise control.

The arrival of Jesus has created quite a buzz at Arsenal and the Brazilian marked his home debut with a virtuoso display with two goals and two assists against Leicester.

A delightful chip gave his side the lead in the 23rd minute and he made it 2-0 with a header at the far post.

Leicester twice clawed themselves back to within a goal of the hosts thanks to an own goal by William Saliba, who like Jesus was making his home debut, and James Maddison.

But Arsenal were always a step ahead with Jesus setting up Granit Xhaka and Gabriel Martinelli scoring immediately after Leicester’s replies.

Leeds looked set for an away win at Southampton with Rodrigo’s brace putting them in control by the hour mark.

But goals by Kyle Walker-Peters and Joe Aribo earned Southampton their first point of the campaign.

Everton suffered a second successive defeat as they went down 2-1 at Aston Villa for whom Danny Ings and substitute Emiliano Buendia were both on target.

Fulham, who drew with Liverpool in their first game back in the top flight, missed the chance to earn their first win as Aleksander Mitrovic had a second-half penalty saved by Jose Sa in a 0-0 draw at Wolverhampton Wanderers.

All games involved water breaks as much of Britain continued to swelter in a heatwave with temperatures reaching the mid-30C yesterday.