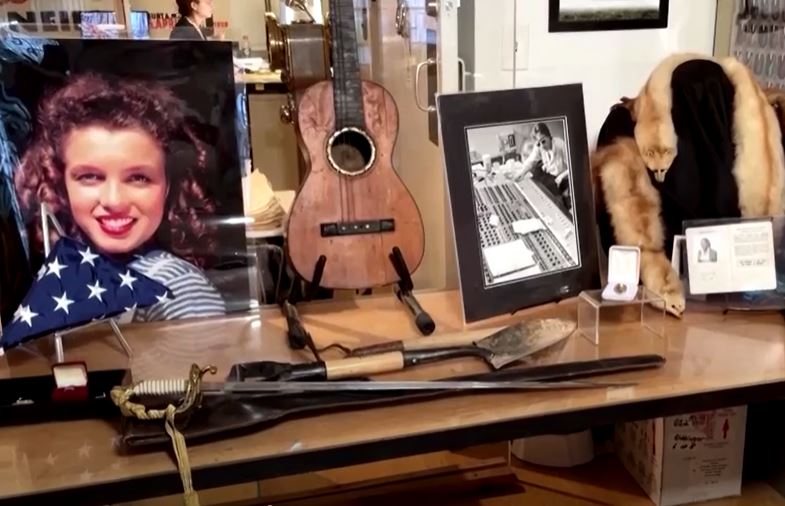 Eclectic objects from pop culture and history, including a guitar owned by blues legend BB King and early photos of film star Marilyn Monroe, will be up for sale at Guernsey's auction house in New York next month.

"It's an auction of iconic objects, things that may have no relation to one another... What they do have in common is that in one way or another, they are pretty remarkable - whether they relate to a famous incident or a famous person," said Arlan Ettinger, Guernsey's founder and president.

B B King's very first and never-seen-before guitar is among the lots. Other items coming directly from the estate of King, who died in 2015, include handwritten music, an African tribal drum given to him by former South African leader Nelson Mandela, and a half dozen stage-worn jackets.

Photos from Marilyn Monroe's first-ever photo shoot are also included in the sale, which come with an interesting backstory.

"In 1945, Captain Ronald Reagan of the US Army asked a private in the Army to go photograph attractive 'Rosie the Riveter'-type young women working at the local war plant... This is one of the original photographs. That woman... became the great and legendary Marilyn Monroe," Ettinger explained, while holding one of the photos.

Also included in the 120-lot sale are sports items from US baseball star Mickey Mantle, as well as jazz singer Billie Holiday's passport and fur wrap.

Historic lots include an engine telegraph used aboard the USS St Louis and a sword that was on display while President John F Kennedy's body laid in state at the White House.

Proceeds from a sale of tools used at the site of the World Trade Center attacks in New York in September 2001 will go to benefit the online 9/11 Tribute Museum.

The auction will take place online at LiveAuctioneers.com and invaluable.com on September 21.