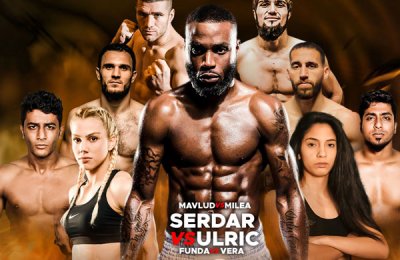 The event poster
BKK Sports is set to make a spectacular debut in Dubai with a star-studded fight night in Al Nasr’s Rashid Bin Hamdan Hall on October 8.
The BKK Kickboxing Championship’s 10-fight card will feature 20 world class fighters and multiple championship winners from around the world, as well as an exciting clash between India’s Muhammed Shuhaib and Shakeel Abdullah Chandio of Pakistan.
BKK Sports, organisers of the championship, are sparing no efforts in making sure their debut event in Dubai is a huge success. They have already signed deals with 64 broadcasters and are expecting the fights to be telecast in 190-plus countries.
Social media campaign
The organisers have also launched an extensive social media campaign and their Instagram page, @bareknucklekombat, has already attracted 356K followers and reached two million viewership. Our Facebook page has more than 5K followers.
“Dubai is home of the spectacular, and we want to make sure our BKK Kickboxing Championship lives up to that image,” said Abdul Rahman Kallayil, Chairman of BKK Sports, who hold multiple portfolios across IT, Health and Sports sector.
“Dubai is a city where every athlete, every fighter wants to come and perform, and we have had no problems in signing some of the best from around the world for our debut fight night,” said Midhun Jith CEO Of BKK Sports, who holds two Primary Guinness World Records in Karate and has also won two kickboxing world championships.
“We would like to thank our partners at Dubai Sports Council, Dubai Department of Economy and Tourism, along with the UAE Muay Thai and Kickboxing Federation, World Association of Kickboxing Organisations and the, for all their support, and for helping us in making our dreams and ambitions come true.
Top-class action
“Dubai has always encouraged sports and event organisers. It is home to people from around the world who love sports, especially combat sports, and BKK Sports is here to serve them with an exciting fight-night of top-class action and entertainment.”
The two-fight main card of the inaugural BKK Kickboxing Championship will feature Swiss star Ulric Bokeme against Turkish Serdar Eroglu, and Romania’s Christian Adrian Mile vs Mavlud Tupiev of Uzbekistan.
The World Championship belt for 90 Kgs Category is scheduled between Swiss Ulric and Turkish Eroglu.
Bokeme is a World Kickboxing Champion, two-time European champion, two-time Romans Champion, and a two-time Swiss Champion, and boasts an impressive professional record of 32-3-0. Sedar Eroglu, meanwhile, owns a 28-2-1 professional, holds record for seventeen times Turkish National champion, IFMA Muay thai world champion, Wako Kickboxing world champion.
Two co-main fights
There will be two co-main fights on the night: Russian star Saifullakh Khambakhadov against Turkey’s Furkhan Semi Karabag, and the ladies bout featuring Turkish legend Funda Alkayis vs Francisca Belen Vera Lizama of Chile.
The Indian and Pakistani expatriates, meanwhile, will get to see two exciting young talents facing-off in the ring in what is being billed as the “highlight fight” of the night.
Pakistan’s Chandio is undefeated in 15 bouts on the professional circuit, but will be up against a more experienced opponent. Shuhaib, who hails from the Indian state of Kerala, has an impressive CV with 60 fights (55 wins and 5 losses) in his amateur career and 16 (14 wins and 2 losses) on the professional circuit.
Muay Thai
“I am really excited about fighting in Dubai,” said Shuhaib, who is a six-time Indian National Muay Thai Champion, and has also won winning the South Indian Championship (2018) and a Muay Thai Championship in Thailand in (2019).
“Dubai is an incredible place, with incredible people from around the world, many of whom are from India, and lots of them from my home state of Kerala. I am really looking forward to seeing them at the fight, supporting me as I carry the Indian flag into the ring against a rival from Pakistan. I get goosebumps thinking of the moment the Indian national anthem will play as I stand in the ring.”
Chandio, who lost his father at the age of five and had to fight the odds to reach where he is now, is also looking forward to the fight, but his heart is burdened by the situation in his home country where devastating floods have killed more than a 1,000 and left thousands homeless.
Pakistan’s challenge
“It is a difficult time for us, as a nation, given the flood situation in Pakistan,” he said. “It's heartbreaking to see the devastation. So my fight here in Dubai, I will dedicate it to the victims of the flood. I want to win it for them and I request all Pakistanis here in this wonderful place to come to the venue and support me.”
The other fights of the night are: El Mehdi Kakrami Bernoussi (Morocco) vs Ferzan Cicek (Turkey); Mohamed El Boukhari (Morocco) vs Mohammed El Mir (Palestine); Worawit Madadam (Thailand) vs Bekmursev Temirlan (Russia); Ben Henia Sabri (Belgium) vs Abdullah Al Falouji (Syria); and Walid Ek Kehal (Morocco) vs Fabio Reis (Portugal).
Bernoussi, El Boukhari, El Kehal and Al Falouji are all UAE-based fighters, who fight under the UAE Muay Thai and Kickboxing Federation, and BKK Sports is keen to promote these talents on the international stage.
The BKK Kickboxing Championship is expected to see a number of officials from the World Association of Kickboxing Organisations, including Roy Baker, President of WAKO, and Espen Lund, General Secretary of WAKO. Senior officials from the UAE Muay Thai and Kickboxing Federation as well as representatives from the Dubai Sports Council and Dubai’s Department of Economy and Tourism will also be in attendance, alongside international stars from combat sports.-- TradeArabia News Service