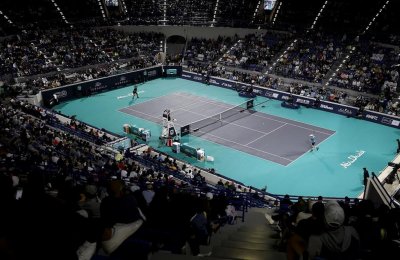 The Mubadala World Tennis Championship is set to return for its 14th edition to the International Tennis Centre at Zayed Sports City in Abu Dhabi from 16 – 18 December, and is marking the 100-day countdown with launch of ticket sales.

Championship owner, Flash Entertainment, have announced global sports fans can get the best seats at affordable prices, starting at Dh95 ($26) for adults and Dh45 for children. Ticketholders will gain access to a series of elimination matches featuring a star-studded line-up as well as quality entertainment off-court.

A 20% discount is available on a limited number of three-day packages, while Premier Hospitality tickets offer fans a premium F&B menu and courtside seating, providing prime viewing and an unparalleled experience.

Flash Entertainment has also revealed that an impressive player field, including six of the best male tennis players and two female players, will be announced in the coming weeks.

Organisers have scheduled the Day 3 matches to take place earlier than usual to ensure fans are able to watch the Fifa World Cup 2022 Final, which is scheduled to take place at 7pm UAE time.

“We opened the window for ticket sales earlier this year as we appreciate advanced planning will be high on the agenda of many sports fans this winter,” said John Lickrish, CEO, Flash Entertainment. “We recommend everyone to reserve their tickets as soon as possible to take advantage of this fantastic opportunity and start planning for what promises to be an incredible championship and a very special ‘finals’ day.”

The three-day championship will once again feature engaging fan activations and plenty of games, in addition to a variety of exciting and entertaining activities for families and sports enthusiasts alike. As well as taking part in player clinics, top-seeded players will also join ticketholders for meet and greet events, providing spectators a chance to interact with their sporting heroes. – TradeArabia News Service