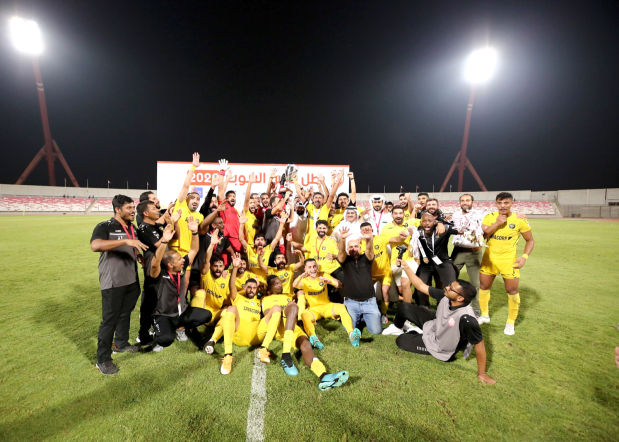 Al Khaldiya continued their fairy-tale run in Bahraini football last night after they defeated defending champions, Riffa, 2-0 in the season-opening Super Cup at the Bahrain National Stadium, with their newly-appointed coach declaring that this was the first of more trophies to follow in the season.

The prestigious Super Cup trophy is contested by the winners of the previous season’s Nasser bin Hamad Premier League and the King Cup. Riffa were crowned Premier League champions at the end of the 2021-22 season earlier this year while Al Khaldiya, a new club formed in October 2020 and in their first season of top-flight football, stunned East Riffa on penalties to win the final of the King Cup last March.

“This was a very good win,” Al Khaldiya coach, Bruno Pereira, for whom this was just his second game in charge since arriving in Bahrain, told the GDN. “We knew that Riffa are a strong team, but we also knew their weaknesses. So we were well-prepared and capitalised on every opportunity we got to exploit their weaknesses.”

After a scoreless first half, the game came to life in the second when Al Khaldiya managed to score two goals in quick succession which, Pereira said, was the result of a shift in strategy at half-time.

“While we were generally in control of the game overall, we had some problems in the first half,” he explained. “But we changed our plans a bit in the second and they worked. I’m really proud of all the players – they all did a great job! This is the first time this young club has won the Super Cup. It’s always good when you make history. And, hopefully, it’s the first of more trophies to come, later this season and beyond.”

Pereira, whose previous coaching assignment was in Thailand, added that he had taken on the Al Khaldiya role because the club’s ‘can-do’ philosophy aligned with his own.

“I chose this project because I felt that the ambition of the club was in line with mine,” he said. “I believe in winning and I came here to win. And Al Khaldiya wants to win because they believe they can win. That’s why I think that if the team can keep the same shape as they did during the second half, we can be sure of success throughout the season.”