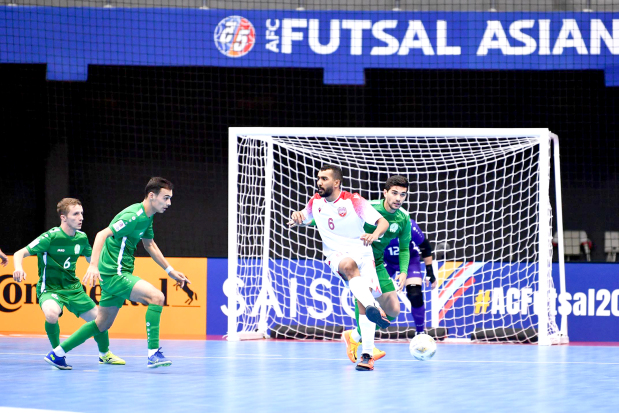 Action from the Bahrain-Turkmenistan encounter on Thursday

Bahrain will play Uzbekistan today in their last Group B game of the 2022 AFC Futsal Asian Cup in Kuwait, needing to win the crucial encounter to keep their hopes of qualifying for the next round alive.

However, even a victory over Uzbekistan will not ensure Bahrain a place in the quarter-finals with their fate depending on the result of a match between Tajikistan and Turkmenistan which will take place earlier in the day.

“We need to beat Uzbekistan in order to have a chance to qualify for the next round,” Bahrain team manager, Raed Baba told the GDN by phone from Kuwait. “But we also need Turkmenistan to defeat Tajikistan, otherwise our victory – provided we win, of course – will be of no consequence.”

While Uzbekistan, who lead the four-team table with six points from their two wins in two games, are already through to the quarter-finals, the second slot could theoretically go to either Tajikistan, who are second with three points, or Bahrain, who are currently third on the table with one point from their two games: a 4-3 loss to Tajikistan and a 4-4 draw with Turkmenistan.

A win against Uzbekistan would give Bahrain four points, but if Tajikistan beat Turkmenistan, their tally would jump to six and their place in the quarter-finals would be assured.

But, if Turkmenistan, who currently lie last on the table with one point (Bahrain rank higher because of goal difference), defeat Tajikistan, they would also end up with four points and thus draw level with Bahrain.

Of course, that would be dependent on a Bahrain victory later in the day. A loss would simply put them out of the tournament.

In another scenario, if Bahrain win but the Tajikistan-Turkmenistan match ends in a draw, both Bahrain and Tajikistan would end up with four points each, requiring goal difference to come into play where Tajikistan would have the advantage.

“Yes, it’s all very complicated,” Baba said. “But we’re focused on playing the best we can and we will try to win. One positive for us is that Mohammed Al Sanadi, our captain, who has been struggling with a leg injury, will definitely play.

“But we’ve also suffered a setback with Mohammed Abdulla, another key player, having to return home because he has to be back at work. Still, we will try our best to win and hope that the result of the other game also goes in our favour.”