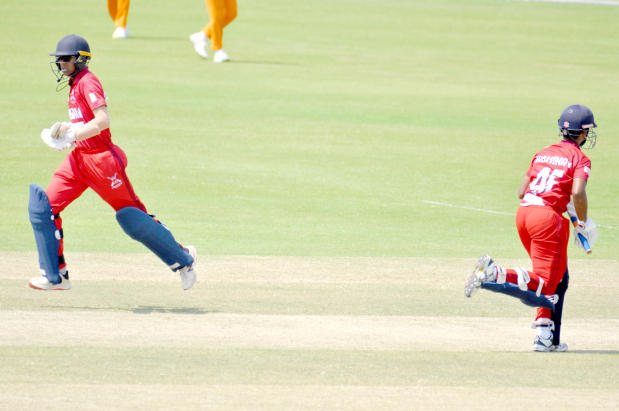 Vishwaesh Gurumurthy, left, and Abhinav Vashisht take a run during the group game against Bhutan

Bahrain will face Singapore today in the second semi-final of the 2024 ICC U19 Men’s Cricket World Cup Asia Division 2 Qualifier at the Al Amerat Cricket Ground in Muscat, Oman.

The kingdom’s young team qualified for the semi-finals by finishing second in Group A, with two wins and a loss to hosts Oman, who topped the four-team table with six points from their three wins from three games.

Singapore topped Group B after winning all three of their matches, with Hong Kong, who placed second in that group, taking on Oman in the first semi-final, which will also be played today.

Bahrain are led by 15-year-old Aryan Ashwin, the left-handed opening batter, and have performed creditably in the tournament, winning their first two games against Saudi Arabia and Bhutan before losing their last match to Oman.

Different players have put their hands up in every game and contributed handsomely to Bahrain’s journey to the semi-finals but the team will be up against difficult opponents in Singapore, who will be favourites going into the knock-out encounter.

Should Bahrain beat Singapore today and qualify for the final, scheduled for tomorrow, they will find themselves on a plane heading to Kuwait in 2023 to play in the Asia Qualifier. According to tournament rules, the two finalists of the Division 2 Qualifier automatically become eligible for the next qualifying round for the world cup.

Kuwait, Malaysia, Nepal and the UAE have already reached the Asia Qualifier.