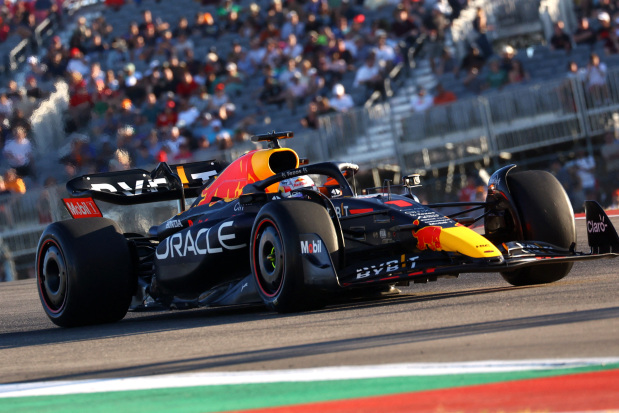 Verstappen in action during practice

DOUBLE Formula One world champion Max Verstappen was fastest in final practice last night for a US Grand Prix likely to hand the constructors’ title to his Red Bull team.

The Dutch 25-year-old, who took his second successive drivers’ title in Japan this month, lapped the Circuit of the Americas with a best time of one minute 35.825 seconds on the soft tyres.

Ferrari’s Charles Leclerc, who will have a 10-place grid penalty for tonight’s race due to power unit changes exceeding his season’s allocation, was 0.320 slower in dry but windy conditions with team mate Carlos Sainz third.

The Ferrari drivers had led both practice sessions on Friday.

Ferrari need to score 19 points more than Red Bull to keep the championship leaders waiting for another week for their first constructors’ title since 2013.

Verstappen has won 12 of 18 races so far this season and a 13th would equal the single-season record held by German greats Michael Schumacher and Sebastian Vettel.

Red Bull, who won the drivers’ title last year and this with Max Verstappen, were found to have exceeded the $145-million cap in 2021 with what the governing FIA said was a ‘minor overspend’.

Some teams have called for strict punishment to send a strong message.

Speaking in a tense US Grand Prix news conference last night with Brown alongside, Horner said the FIA had proposed an Accepted Breach Agreement (ABA) and that was under negotiation.

“I’m hopeful it can be resolved during this weekend,” he added.