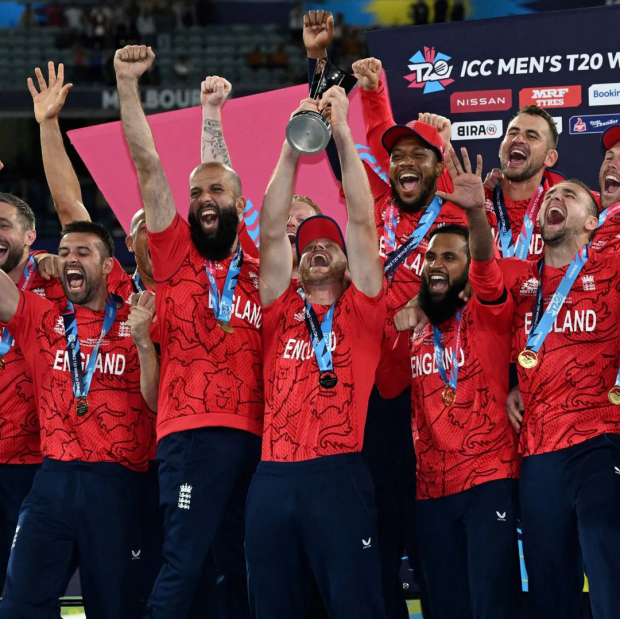 The England players celebrate with the Twenty20 World Cup

BEN Stokes held his nerve with an unbeaten half-century as England claimed their second Twenty20 World Cup title with a five-wicket win over Pakistan at the Melbourne Cricket Ground yesterday.

Thirty years after losing the 50-over World Cup final to Pakistan at the MCG, England turned the tables on the south Asians with brilliant death bowling and with Stokes finishing on 52 not out in a chase of 138 for victory.

England became the first nation to hold both global white ball titles, having won the 50-over World Cup on home soil in 2019.

In the nerve-jangling final win over New Zealand in 2019, Stokes also stood tall with an unbeaten 84.

All-rounder Sam Curran was player-of-the-match after finishing with miserly figures of 3-12 as Pakistan collapsed late to finish on 137 for eight, having been sent in to bat by England captain Jos Buttler. He was also named player-of-the-tournament after consistent brilliance in death bowling.

“Very special but I don’t think I should be getting this, I think the way Stokesy played there – to get a 50 in the final, he does it so many times for us,” said Curran.

“We are going to enjoy this occasion, very special.”

The heavy rain forecast never hit the MCG as England endured some nervous moments before Stokes struck a single off Mohammad Washim to seal victory with six balls to spare.

Leg-spinner Adil Rashid did the early damage for England with two wickets, including the key scalp of captain Babar Azam for 32, before Pakistan crumbled in the final overs, losing 4-10.

Pakistan will wonder what might have been, with talismanic paceman Shaheen Afridi breaking down with injury and leaving the field after catching Harry Brook for 20 in the deep.

He returned to bowl one dot ball but could not go on, and it proved a turning point as Stokes and Moeen Ali (19) pushed England well ahead of the required run-rate in an attack on the bowlers.

“Our bowling is one of the best in the world. But for the unfortunate injury to Shaheen Afridi, it could have been a different result,” said Pakistan captain Babar.

Earlier, it was Curran setting the tone for England as he had opener Rizwan chopping onto his stumps for 15, breaking a 29-run opening partnership with Babar.

Rashid struck with his first ball when Mohammad Haris (8) slogged for the long-on fence but was caught by Stokes. Rashid then made a brilliant caught-and-bowled dismissal of Babar for 32 in a wicket-maiden over.

Stokes had Iftikhar Ahmed caught behind for a duck, leaving Pakistan in trouble at 85 for four.

Though Shan Masood and Shadab Khan combined for 36 runs, Masood holed out for 38 with a miscued slog as Curran swung the momentum back for England at the death.

England’s chase got off to a rocky start, with Afridi bowling Alex Hales for one run and Buttler lost another partner when Phil Salt pulled Haris Rauf straight to Iftikhar Ahmed at midwicket to be caught for 10.

A fired-up Rauf then had Buttler nick behind for 26 as Pakistan fought back to 3-45.

England were soon shackled by quality pace, with Stokes and Brook slowing to a crawl.

With Afridi injured, Iftikhar had to bowl out his over and conceded 13 runs, with Stokes smashing a four and a six in consecutive balls to put England back in command.

Stokes and Moeen then combined to carry England to victory, with Liam Livingstone adding one run after Moeen was bowled out in the 19th over, as Buttler’s team again staked their claim as the pre-eminent superpower of white ball cricket.

“Immensely proud. A long journey and a few changes, but we’re reaping the rewards,” said Buttler.