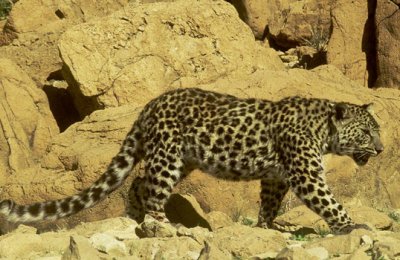 The endangered Arabian leopard
Under the Saudi Green Initiative (SGI), the kingdom has committed to protecting 30% of its terrestrial and marine area and is teaming up with leading global organisations to safeguard and restore the natural ecosystems.
At the SGI Forum 2022, Saudi Arabia announced it will achieve the SGI target of placing 30% of its land and sea under protection by 2030.
Saudi Arabia’s protected areas cover a variety of geographies, including deserts, forests, mountains, and coastal areas. For example the AlUla Protected Areas Network is being established in collaboration with IUCN. By 2023 this will comprise 15,000 sq km of protected areas that will help conserve biodiversity in the region.
Nafud Desert
The Ba’a Foundation is working to preserve 38 million sq m of the al Nafud desert by 2025. This will enable the release of indigenous animals and establish a pilot project for sustainable farming.
Saudi Arabia will help rehabilitate and restore ecosystems by planting 600 million trees by 2030, an increase of over 150 million trees from the initial goal to plant 450 million by 2030.
The National Centre for Wildlife is working to restore and rewild endangered endemic species in 10-15 locations per year. Last year more than 1,200 endangered animals were released into the wild. Projects include a $25 million fund that will finance efforts to conserve the critically endangered Arabian leopard. Further breeding centres are due to be opened in the Sharaan Nature Reserve by 2024, with the overall aim that the species will eventually be reintroduced into AlUla’s mountains.
Nubia ibex
A pilot project in collaboration with Soudah Development will reintroduce the Nubian ibex in the Asir mountains, where the first herd of ibex are due to be released into the wild this month.
Saudi Arabia will re-establish the Arabian oryx in the kingdom. This is the first species to have gone from being classified as extinct in the wild to vulnerable, thanks to NCW’s work to bring a self-sustaining population of oryx back to the landscapes of Saudi Arabia.
The Ba’a Foundation’s is working to protect Red Sea turtles from extinction. The foundation aims to increase turtle nesting rates at Ras Baridi by 20% and hatchling survival rates to 25-30%.
Global Ocean Alliance
In October 2021, Saudi Arabia announced that it was joining the Global Ocean Alliance, an international organisation dedicated to ocean conservation. A core goal of the Alliance is safeguarding at least 30% of the world's oceans by 2030 through marine protected areas. The kingdom is one of few Arab countries to be part of the alliance.
Saudi Arabia is also working to establish the Ocean Exploration Foundation, which will be responsible for conducting research and exploration of the world's oceans.
The National Centre for Wildlife is developing a national strategy for the sustainable use of coastal and marine areas, which aims to conserve marine biodiversity and reduce damage to coral reef coral reef habitats. The strategy will be completed in 2025.
Mangrove planting
Mangrove planting is a key focus under SGI. These wetland forests are a living barrier against shoreline erosion and provide important breeding grounds for marine wildlife, enhancing the biodiversity of Saudi Arabia’s coastline.
Some 100 million mangroves are set to be planted along the kingdom’s coastline by 2030. The initiative will offset 96 million tonnes of CO2e, help stabilise coastline ecosystems and prevent coastal erosion.
The Mangrove Plantation Pilot at Jeddah Islamic Port will plant mangroves to contribute to cleaning seawater, enriching marine biodiversity, and restoring aquatic life.
Kaust Reefscape Restoration
The Kaust Reefscape Restoration Initiative is a large-scale coral reef protection programme in the Red Sea. The effort will be a mix of coral conservation, enhancement, and restoration.
Amaala and the Red Sea project are establishing a 6,693 sq km of ‘no-take’ Marine Protected Area as part of the proposed new Special Economic Zone around the developments. This will assist efforts to protect and recover key protected species that are accidentally impacted or killed by fishing operations, and reduce coral reef habitat damage from excessive anchoring.-- TradeArabia News Service