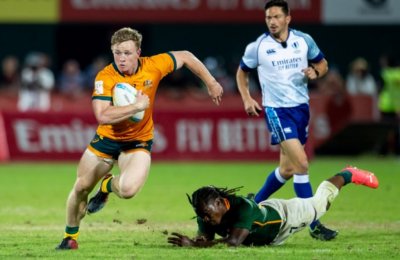 Over 420 sports teams will play in high-powered competitions spanning rugby 7’s, cricket, netball, and the annual festival’s newest addition, a fitness competition, WODON3, geared for both elite and amateur athletes looking to push their limits.

The HSBC World Rugby Sevens Series usually kicks off its season at the Emirates Dubai 7s with some of the world’s best male and female pro-rugby players from 28 countries with top-ranking and Olympic winning teams participating, including Australia & Fiji as well as Dubai fan favourites South Africa, Ireland & Great Britain, all set to compete on the pitch.

At the Emirates Dubai 7s, rugby action isn’t be limited to professional players. The truly inclusive event will also host International Invitational and Open Tournaments for Men & Women as well as Social, Vets for the over 35s and Under 19 Boys competitions while the best teams from across the Gulf Region will battle it out for the Gulf Men’s League, Open, Social, Vets, Women, U19 Boys and Girls, and the UAE National Development Cup, created exclusively for Emirati players. These 16 additional events will be played across the three days at The Sevens Stadium.

On the cricket front, the Emirates Dubai 7s will be hosting teams to compete in the Open Competitive & Open Social, competitions accessible to women, men and youth as well as the Emirates Aviation Cup invitational tournaments.

Netball is one of the largest female participation sports with 20 million people playing in more than 80 countries, and a growing fan and participant base. The sport has been increasing in popularity in the UAE, both at school and in amateur league levels, with over 1,000 people here playing every week. The Emirates Dubai 7s has been supporting the development of the game and this year is set to kick off the Open Women, Open Women Social, Youth, Mixed, Gulf Women and Gulf Youth Aspire invitational tournaments.

The Emirates Dubai 7s will also be hosting, for the first time, WODON3, a functional fitness competition that caters to all athletic levels. WODON3 was born out of the increasing synergy between fitness and the existing sports, rugby 7’s, netball and cricket, and is set to bring even more excitement to the event.  WODON3 will be a platform for athletes to display teamwork, test their fitness, and experience the festival vibes from morning until dusk.

Off the field, the Emirates Dubai 7s offers a host of music attractions such as Rugby Rocks, The House, Beats on Two and Frequency on 8. The stages will include live sets from The Cuban Brothers, world renowned DJ duo Gorgon City and megastar Craig David will present TS5 to round off this year’s Festivities. – TradeArabia News Service