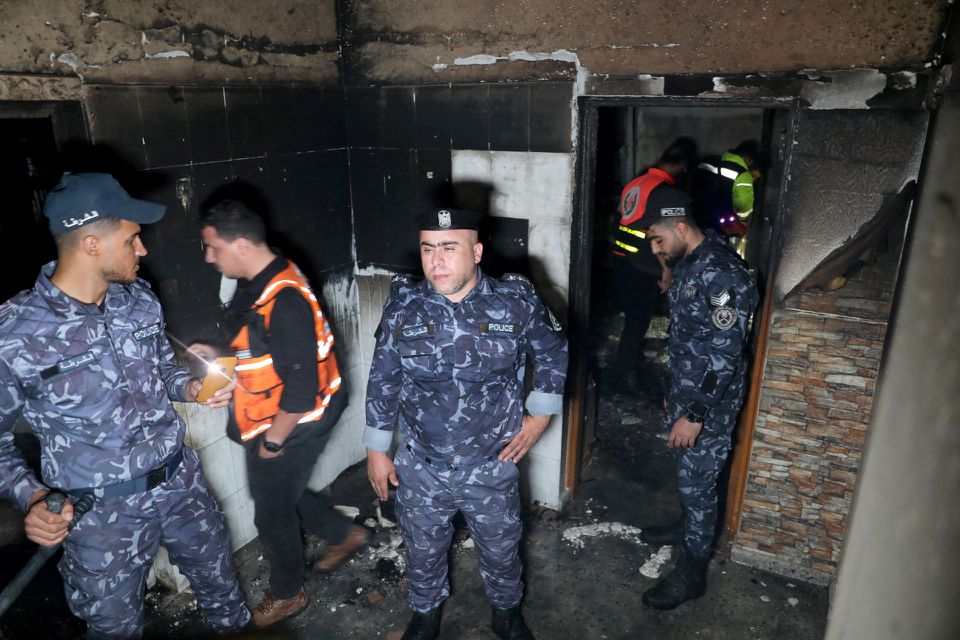 Palestinian Hamas police officers check the scene of a fire that broke out in a building where residents attended a party in the northern Gaza Strip November 17, 2022. Reuters Photo

GAZA: At least 21 people were killed and several others injured when a fire broke out in a building where residents attended a party in the Gaza Strip, health and civil emergency officials said on Thursday.

It took fire fighters more than an hour to get control of the massive flames that burst through the top floor of a four-story residential building in the densely-populated Jabalia refugee camp in northern Gaza Strip.

Ambulances rushed several injured people to local hospitals, and Israel, which together with Egypt maintains a blockade on Gaza, said it would allow in those in need of medical treatment.

Gaza's Interior Ministry said an initial investigation revealed that large amounts of gasoline had been stored at the site, fueling the blaze that quickly engulfed the building.

Witnesses said they could hear screaming but they could not help those inside because of the intensity of the fire.

Palestinian Hamas police officers check the scene of a fire that broke out in a building where residents attended a party in the northern Gaza Strip November 17, 2022. REUTERS/Mohamad Qandel

Palestinian President Mahmoud Abbas called it a national tragedy and said there would be a day of mourning.

Hussein Al-Sheikh, secretary-general of the executive committee of the Palestine Liberation Organization (PLO), said in a statement that the Palestinian Authority urged Israel to open the Erez crossing with Gaza to transport serious cases in order to treat them outside the enclave if necessary.

"The President gave instructions to provide all forms of medical and other assistance urgently," Sheikh said on Twitter.

Tor Wennesland, the United Nations' Middle East peace envoy expressed "heartfelt condolences" to the families of those who died in the incident, in a post on Twitter.

Jabalia is one of eight refugee camps in Gaza, home to 2.3 million people and one of the world's most densely populated areas.