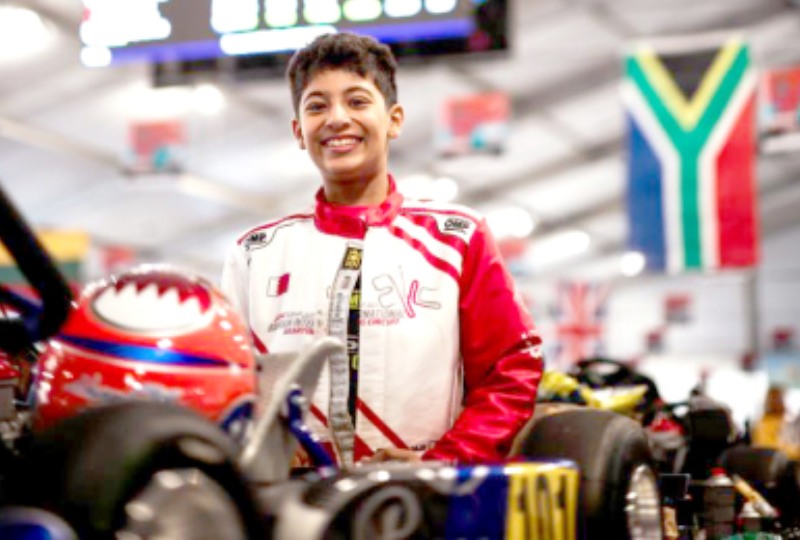 Khaled Al Najjar, Bahrain’s highly-rated karting prodigy, is set to compete in the race of his young life today as he battles the elements and the world’s top karters in a bid to qualify for the final of the Mini category in the Rotax MAX Challenge Grand Finals 2022 in Portimao, Portugal.

Khaled, 11, qualified for the championship by winning the Mini Max category in the Bahrain Rotax MAX Challenge (BRMC) 2021-22 earlier this year.

But a combination of fickle weather in Portimao and bad luck in the qualifying heats yesterday and on Wednesday means that he will start the pre-final race this afternoon near the bottom of the 36-kart grid.

In order to qualify for tomorrow’s final, Khaled will have to finish in the top 16 – a tall ask by any standards but made even more difficult by the fact that he will be starting in 32nd position, coupled with weather conditions that change almost by the minute.

But the young driver is determined to do his best, even though rain – which complicated matters for all the karters in the qualifying heats – might result in conditions which are very different from those he is used to in Bahrain.

“I was a bit unlucky on Wednesday,” Khaled told the GDN in an exclusive interview by telephone from Portimao. “Someone crashed into me right after we started and I was trailing everyone after that. I managed to finish the heat but I came in last.

“I had more bad luck yesterday with another incident during the first heat. And then, the same thing happened in the second heat. But that’s all behind me now. I am focused on the pre-final race and, hopefully, I shall be able to put up a good show.”

Five karters are representing Bahrain at the competition, four of whom, including Khaled, drive for Praga Middle East (Praga ME), the kingdom’s first and largest karting team.

“Khaled was unlucky on both days,” Khalid Alsaei, the Praga ME team manager who has accompanied the young karter to Portugal, told the GDN. “On Wednesday, he started with a strong pace and he was looking good but, then, the accident happened.

“Yesterday, again, his pace was good but a couple of small accidents in both races set him back. Now, to qualify for the final, he will have to try and move up the grid in the race and make sure that he collects enough points which, when tallied with those he got from the qualifying heats, are enough to send him through.”

Alsaei, a former karting champion himself, has coached and mentored Khaled since 2017 since the little boy, then aged six, was brought over to the Praga ME team by his father, Ali Redha Al Najjar.

“We could see that he had a tremendous amount of talent and potential,” Alsaei explained. “So we invited him to join the team and he has been with us ever since.”

Al Najjar, 41, a successful businessman and car collector, who chaperones his son to various competitions around the world, told the GDN from Portimao that his own passion for cars had resulted in Khaled showing an interest in car-racing from an early age.

“Khaled grew up seeing lots of cars in our garage,” Al Najjar said. “I used to take him to drag races and to the Bahrain Grand Prix; he used to meet F1 drivers and, I suppose, it was only natural that he wanted to start driving competitively as soon as he could.”

Still, even as he is immensely proud of his son, Al Najjar admitted that he is always nervous when Khaled drives in a race.

“Honestly, as a parent, my heart is always in my mouth,” he explained. “These races are tough and can be dangerous. Other drivers bump into him and try to push him off the track. But Khaled is so brave and focused. It doesn’t seem to bother him.”

As his son continues to shine in competitions across the world – Khaled has competed in Italy, the UAE and Kuwait, apart from Bahrain – Al Najjar said that he was now looking at helping his son forge a career in motorsport.

“He has the talent and potential,” he explained. “I don’t want to get too far ahead of myself and say that he could drive in the F1 one day. The plan is to push him for motorsport.

“After karting, we’ll try for the Formula 4. The good thing is that he started very young. That gives him an advantage. Of course, we don’t know where he’s going to end up but the plan is for him to have a career in motorsport.”

“There’s definitely a top-level racing career in Khaled’s future,” he said. “He’s still developing – and developing quite rapidly – and, who knows, he could possibly drive in the F1 some day.”

For now, Alsaei said, Khaled needed to focus on the task at hand: the pre-final race.

“He has to aim for a top 10 finish,” he declared. “I know it’s going to be tough, especially since he’ll be starting from the back of the grid. But he has the skill and he has shown in these last two days that he has a promising, strong pace. We’ll see what the race brings.”