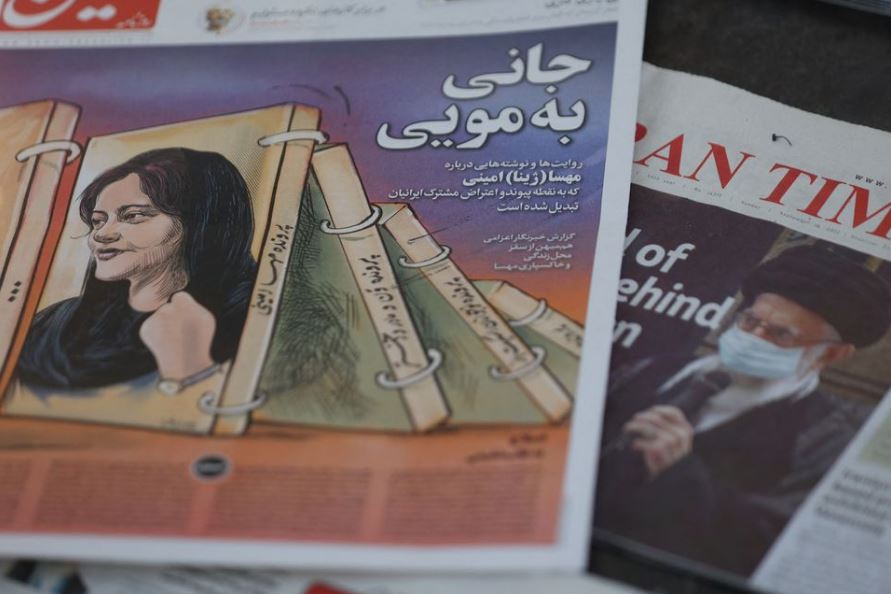 Iranian shops shut their doors in several cities yesterday, following calls for a three-day nationwide strike from protesters seeking the fall of clerical rulers, while the head of the judiciary blamed what he called “rioters” for threatening shopkeepers.

The semi-official Tasnim news agency reported that an amusement park at a Tehran shopping centre was closed by the judiciary because its operators were not wearing the hijab properly.

The reformist-leaning Hammihan newspaper said that morality police had increased their presence in cities outside Tehran, where the force has been less active over recent weeks.

Iran’s public prosecutor had said on Saturday that the morality police had been disbanded. But there was no confirmation from the Interior Ministry and state media said the public prosecutor was not responsible for overseeing the force.

Ali Khanmohammadi, spokesman for Iran’s headquarters for Promoting Virtue and Preventing Vice which oversees implementation of religious edicts, said yesterday the era of the morality police was over, but that there will be other methods to enforce Islamic dress code.

In the shop protests, 1500tasvir, a Twitter account with 380,000 followers focused on the protests, shared videos of shut stores in commercial areas such as Tehran’s Bazaar, and other large cities such as Karaj, Isfahan, Mashhad, Tabriz, and Shiraz.

The head of Iran’s judiciary, Gholamhossein Mohseni Ejei, said that “rioters” were threatening shopkeepers to close their businesses and added they would be swiftly dealt with by the judiciary and security bodies.

The Revolutionary Guards issued a statement praising the judiciary and calling on it to swiftly and decisively issue a judgement against “defendants accused of crimes against the security of the nation and Islam”.

Security forces would show no mercy towards “rioters, thugs, terrorists”, the semi-official Tasnim news agency quoted the guards as saying. Witnesses said riot police and the Basij militia had been heavily deployed in central Tehran.

The semi-official Fars news agency confirmed that a jewellery shop belonging to former Iranian footballer Ali Daei was sealed by authorities, following its decision to close down for the three days of the general strike.

Similar footage by 1500tasvir and other activist accounts was shared of closed shops in smaller cities like Bojnourd, Kerman, Sabzevar, Ilam, Ardabil and Lahijan.