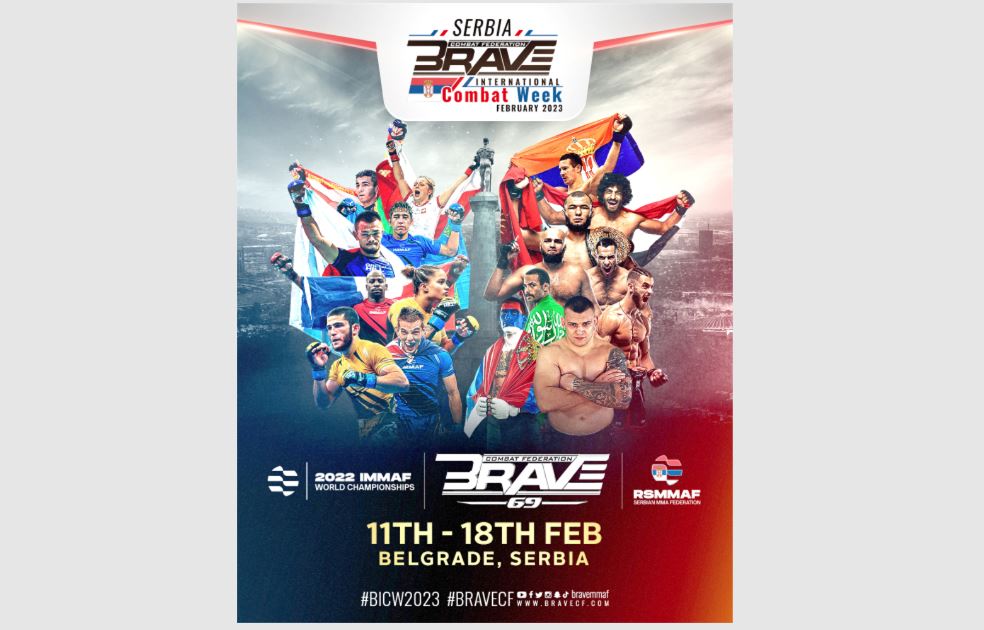 The BRAVE Serbia International Combat Week will have the biggest impact for mixed martial arts in Europe as the largest event to take place in the continent.

During recent weeks, the level of support given by the government of Serbia to the sport has been recognised as the first of its kind for mixed martial arts in Europe. During last week’s launch Press conference, Serbian Sports Minister Zoran Gajić officially endorsed mixed martial arts as a sport and announced the inclusion of MMA as part of the sports development initiative of Serbia.

BRAVE CF president Mohammed Shahid says he expects other European countries to follow the example, which will see the participation of the private sector to create a sports economy for mixed martial arts in these nations to further develop the sport on a continental level. He noted recently that the impact of BRAVE International Combat Week can be exemplified by Bahrain – which was supported by BRAVE CF founder Shaikh Khalid bin Hamad Al Khalifa, with the government support snowballing onto the Middle East, and eventually in Asia. Shahid is confident that the same snowball effect will be seen in Europe, with Serbia as the starting point.

The action in Belgrade will kick off on February 11 with the IMMAF World Championships, as more than 500 athletes are expected to represent over 60 nations in what will be known as the biggest edition of the number one amateur MMA competition in the world.

The festivities will come to a climax on February 18, when BRAVE CF kicks off its 2023 campaign with BRAVE CF 69, headlined by a unification bout in the lightweight division, as interim world champion Abdisalam Kubanychbek takes on top contender Kamil Magomedov for the lineal world title at 155 pounds. Also set for fight night are the homecomings of two of Serbia’s biggest-ever stars – Darko Stosic takes on Shamil Gaziev in his first bout in Serbian soil since September 2017, while Aleksandar Ilic faces Marcin Naruszcka in a catchweight bout of 88kg, for his first fight in his home country since April 2018.

The official poster for the BRAVE Serbia International Combat Week has now been released, featuring top fighters from the IMMAF World Championships, with world champions Fergus Jenkins (New Zealand), Sabrina Sousa (Bahrain), and Yersultan Shakenbay (Kazakhstan) among the amateur athletes heavily featured. They are joined by the professional stars that will feature in the BRAVE CF 69 fight card, such as Saudi Arabia’s Abdullah Al Qahtani, Egypt’s Olympic wrestler Mahmoud Sebie, and Kubanychbek.