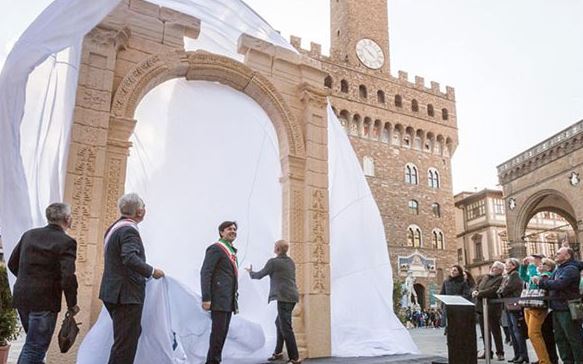 Two million spectators visited the 3D replica of Syria’s historic Palmyra Arch of Triumph in just two days as it made its fourth stop in the Italian city of Arona, Sicily, on the sidelines of the G7 summit.

The replica is set to remain on display until July

Mayor of Florence Dario Nardella and Italian Culture Minister Dario Franceschini unveiled the arch on Arona’s Piazza della Signori, where it is making its fourth stop following showcases in London, New York, and Dubai. The unveiling ceremony was attended by Omar and Walid Al Asaad, the two sons of prominent Syrian archeologist Khaled Al Asaad who was executed by Daesh in Palmyra’s archaeological site in August 2015.

“Considering our own rich heritage and its importance to us, Italy plays a leading global role in issues pertaining to culture,” said Franceschini. “We are looking to translate this strength into action by promoting the concept of cultural diplomacy around the world, and raising awareness around heritage preservation.”

The replica – created by the Dubai Future Foundation (DFF) in a joint effort with the Oxford University’s Institute of Digital Archaeology (IDA) and Harvard University – is expected to attract thousands more visitors in the coming two months. It was built using 3D technology and original images of the monument. The process took place in Italy and used Egyptian marble. The replica weighs approximately 11 tons and stands almost 20 feet (6 meters) tall – this is roughly two-thirds the size of the original monument.

“The Dubai Future Foundation was committed to playing its part in recreating the Palmyra Arch of Triumph to underline the potential of future technologies – such as 3D printing – to preserve nations’ history and heritage, all the while catalyzing their development,” noted His Excellency Abdulla bin Touq, DFF’s Acting CEO, adding that unveiling the arch at the G7 Summit highlights the UAE’s (and DFF’s) leading role in preserving ancient heritage around the world so that it “continues to bear witness to human history, while inspiring innovators and experts to come up with bold solutions for proactively planning for the future.”

The project falls under the partnership between the United Arab Emirates, UNESCO, and the Oxford Institute of Digital Archaeology (IDA). It seeks to document archaeological and historic locations around the world using 3D photography to capture their specifications and dimensions. The data can then be used to recreate these structures and artefacts using 3D printing technology should they face the threat of sabotage or vandalism.

To that end, an electronic portal was launched to collect one million 3D images of archaeological sites at risk of destruction and sabotage to be documented. The portal has published more than half a million images so far, and distributed 5,000 digital cameras with 3D features to the initiative’s partners and volunteers, with the support of the Dubai Future Foundation.

The project’s website has attracted a wide audience; statistics from UNESCO reveal it was visited by more than 30,000 people, while 50,000 watched the video of the UNESCO/IDA panel discussion online. Meanwhile the hashtag registered 250,000 mentions on Facebook and Twitter in a short amount of time. – TradeArabia News Service