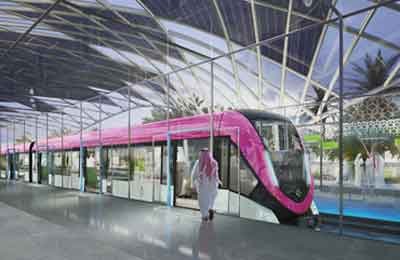 Dayton Superior, a key player in the nonresidential concrete

Dayton Superior, a key player in the nonresidential concrete construction industry, said it has won a major contract to supply standard and custom steel forming systems for Phase One of the $22-billion Riyadh Metro project in Saudi Arabia.

These forming systems, from Symons by Dayton Superior, will be used to form the straddle bent columns and caps as well as hammerhead columns and caps for the metro project, said a statement from the US-based company.

The contract has been awarded by the project developer Riyadh Development Authority (ADA).

This Consortium is part of three Consortia which will deliver a total of 6 lines for Riyadh Metro project.

Dayton Superior said the project’s straddle bents will be fully supported by a custom column-hung support system allowing the self-spanning forming systems to extend as much as 25 m over live traffic.

The entire system transfers all loads to the columns, thus leaving a clear path for traffic and avoiding lengthy construction-related delays, it stated.

"We have very strong engineering, supply chain logistics, operations and commercial teams focused on delivering millions of pounds of Symons forms to the project before year end," said Jim McRickard, the president and CEO of Dayton Superior.