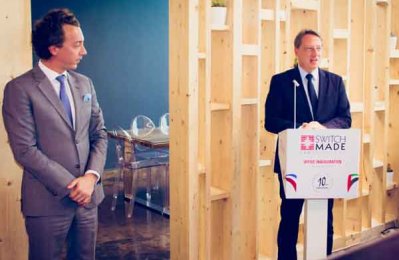 France-based Switch Made, a leading manufacturer of LED lighting solutions, revealed it is further expanding its operations in the UAE with the opening of a new global hub office in Dubai.

This coincides with the 10th anniversary of Switch Made’s operations in the UAE, with the new global office being beefed up with a dedicated team of experts from the company’s France office taking up positions in Dubai, said a statement.

The unveiling of the global base of Switch Made in the UAE complements the call by French President Emmanuel Macron to enhance the role of French companies in international entrepreneurship, it said.

The French Ambassador to the UAE, Ludovic Pouille, marked the new expansion and opening of the global office and congratulated the company for its strategic focus on expanding its presence in the country. He was accompanied by Emmanuel Mayer, vice consul general of France in Dubai, and other dignitaries and business leaders, it added.

Pouille said: “This is a commendable example of French companies strengthening their international footprint and sharing invaluable French expertise for supporting the development of the UAE.”

“Over the past years, France-UAE ties have grown manifold, with French business expertise, especially in areas such as sustainable development and renewable energy, complementing the development vision of the UAE,” he added.

“Switch Made has an accomplished track-record in delivering energy-efficient lighting solutions and the new office will enable it to further contribute to the UAE’s Vision 2021,” he said.

Jeremy Loisel, CEO, Switch Made, said: “With our expanded presence, we are building on 10 strong years of operations in the UAE, marking a new milestone in our growth journey.”

“We are bringing top-notch French experts to support our business growth in the UAE, complementing the development goals of the nation. French companies already play a significant role here by providing cutting edge technology and expertise, and through our enhanced local presence, we can be more agile and closer to our customers in meeting their requirements,” he said.

“Our French headquarter is currently being restructured, and reflecting the consequent change of business model, focusing on manufacturing LED luminaires for projects. We are also in the final stages of partnering with a reputable industrial group, which will take our growth to the next level. 2018 is a decisive year for our French market,” he added.

Switch Made has already been associated with several landmark projects in the UAE including the provision of energy-efficient sustainable lighting solutions for the façade of The Dubai Mall, supplying more than 52,000 LED luminaires. It also delivered over 8,800 LED light fittings and over 2 km of linear solutions for the Swiss International Scientific School in Dubai, which is the Middle East region’s first low-energy building that complies with the MINERGIE Ecolabel, a Swiss sustainable building standard.

Several flagship projects in the UAE have been developed through close co-operation with France, such as Louvre Abu Dhabi and the Paris-Sorbonne University Abu Dhabi, the only French-language university in the Gulf.

Total trade between the two countries was estimated at $5.6 billion in 2016. The UAE is France’s second-largest trading partner in the Gulf, and is also the second largest Gulf investor in France. There are over 600 French subsidiaries in the UAE.

“The UAE has outlined a clear vision to be among the best nations in the world, and has set tangible targets in reducing energy consumption and promoting sustainable solutions. As a French company with proven expertise in supporting the needs of nations and companies with sustainable lighting solutions, we are committed to be a partner in the progress of the UAE by bringing French expertise to the nation’s development projects,” concluded Loisel. – TradeArabia News Service