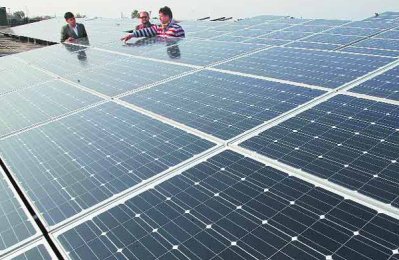 The construction sector across the Middle East and North Africa (Mena) countries can expect to see an increase in building integrated photovoltaic (BIPV) components as the region strives to achieve decarbonisation targets.

“Over the course of 2018 there will be further innovations in energy and storage technologies along with new regulatory frameworks to boost the solar industry,” stated Gurmeet Kaur, Marketing and Communications Manager at Middle East Solar Industry Association (MESIA).

Reporting that buildings account for 40 per cent or more of the energy consumed in cities, the latest ‘BIPV in the Mena Region’ report from MESIA and The Big 5 Solar coins BIPV as a vital clean energy industry.

BIPV components can be designed in a multitude of ways, be it solar facades, solar windows, or even solar roofs which can then be installed in car parks, bus stations, stadiums and even homes.

“Aside from helping to save on electricity costs, and increasing overall efficiency, BIPV can truly add a unique visual elegance and architectural beauty to a building,” stated Anoop Babu, Mena Regional Manager of Architectural Solar Association (ASA).

A contributor to the report, Anoop highlights that BIPV in the region will be defined by upcoming challenges such as the need for country specific regulations and product testing protocols.

He pointed out that the ASA have been in talks with major decision makers to develop approaches toward these challenges and forecasts that a positive outcome will come:

“We are confident the BIPV market will soon see many changes in regulation, and that BIPV technology will be fully rolled out to help the MENA region succeed in its decarbonisation strategy.”

MESIA return to The Big 5 Solar this year as Knowledge Partner for the event. They encourage the gathering of solar professionals in the MENA and provide the community with up to date intelligence.

The Big 5 Solar will showcase BIPV solutions alongside the largest construction event in the Middle East, The Big 5 from 26-29 November 2018 at Dubai World Trade Centre.

In addition, BIPV will be featured as a CPD (continuing professional development) certified topic aon the education agenda at The Big 5 Solar 2018.

BIPV projects in the MENA include: Dubai Frame with 1,200m2 PV glass; the Makkah Royal Clock with 233 solar panels on its dome; and Dubai Electricity Authority HQ with 10,000m2 of BIPV solutions.