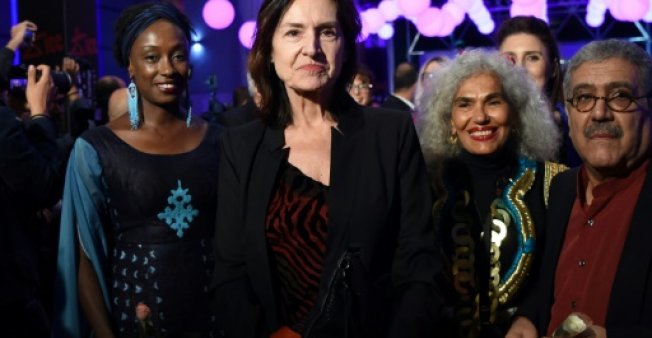 © AFP | Carthage Film Festival's Jury President Deborah Young (C) arrives with members of the jury on November 3, 2018, for the opening of the 29th edition of the Carthage Film Festival in Tunis
Tunis – Tunisia kicked off a major film festival Saturday under tight security, just days after a suicide blast rocked the centre of the capital.
Events at the Carthage Film Festival are being held a stone's throw away from where a female suicide bomber wounded 20 people in central Tunis on Monday.
"We wanted to show that Tunisia continues to live," Prime Minister Youssef Chahed told AFP at the opening ceremony.
"Tunisia combats terrorism through security measures... and also through culture."
The festival, now in its 29th year, celebrates the best of Arab and African cinema and is set to run for one week.
Monday's attack was the first in the Tunisian capital since November 24, 2015 when a suicide bombing killed 12 security agents on a bus for presidential guards. That attack was claimed by the Islamic State jihadist group.
Since the 2011 uprising that toppled dictator Zine El Abidine Ben Ali, jihadist attacks in Tunisia have killed dozens of foreign tourists and members of the security forces.
In June 2015, 38 people were killed in a shooting rampage at the coastal resort of Sousse which targeted tourists, while an attack in March that year on the National Bardo Museum in Tunis left 22 people dead, most of them tourists.
Those attacks, also claimed by IS, devastated Tunisia's crucial tourism sector.