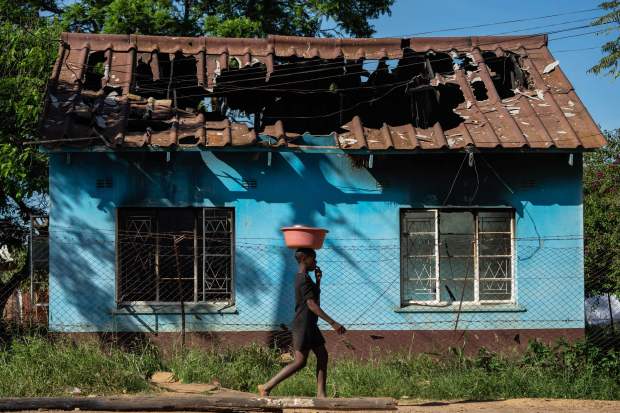 TOPSHOT - A young woman carries a bowl on her head as she walks past the shell of the burnt-out offices belonging to the ruling ZANU PF party's Kadoma district in Rimuka township, Kadoma on January 24, 2019. AFP / ZINYANGE AUNTONY

Harare An ecstatic Zimbabwean passenger Shylot Sibanda screams with joy as he boards a bus from downtown Harare to the township of Budiriro. The fare has been slashed to a third of what he paid last week.

It's the result of government action -- after nationwide demonstrations over fuel hikes earlier this month -- in a country suffering from spiralling inflation and regular shortages of necessities.

Under pressure following international criticism of its brutal put-down of the protests, the government has scrambled to revive its public transport company Zupco after years of mismanagement and corruption.

"We are happy with what the government has done and we hope it continues," Sibanda, 40, yelled through an open window as the bus pulled out of the busy terminus.

"Now we can afford to buy some food and pay rent and we are very happy," he added, beaming.

Hard-pressed Zimbabweans took to the streets in several cities and towns after President Emmerson Mnangagwa announced on January 12 that fuel prices were being more than doubled.

Rioting and looting followed before soldiers and police brutally put down the protests at the cost of at least 12 lives, according to NGOs.

Hundreds of people were injured, including dozens from bullet wounds, and allegations of abuse and rape have been levelled at security forces.

Now, the Zupco revival means passengers can pay just $1 on a bus rather than the $3 being charged recently by mini-buses run by private operators known as kombis.

In recent years Zupco has run only a small number of buses, mainly on long-distance routes, having been displaced in urban areas by kombis.

But since January 21, the government has hastily augmented Zupco's much-depleted fleet.

An AFP team took a ride on one such bus to Budiriro. An armed soldier and an armed policeman sat in the front rows. Another stood in the aisle.

"We just boarded the bus and paying $3 has come to an end," said one pleased passenger, Nomatter Nyakurwa.

Zimbabweans have in recent months seen prices spiral -- up to fourfold in some instances.

Inflation is officially at 42 percent, the highest in a decade, but in reality it is far higher.

"Prices have increased two, three times and these are the prices we see daily in the shops," said independent economist Persistence Gwanyanya.

The cost of living has been rising at a rate unseen in the landlocked country since the meltdown in 2008 when hyperinflation forced the government to trash its own currency.

The government said the reintroduction of the state-run commuter services was to bring order to an industry dominated by kombis for decades.

Kombi operators complain, however, that the government has priced them out of the market, in a move seen by some critics as populist and unsustainable.

"Our immediate concern was to make sure we control the chaos that we were now having," said Transport Minister Joel-Biggie Matiza, referring to the recent sharp increase in kombi fares.

But "it's not for short term, this is real, it's going to continue, we will make sure that it's sustainable and at the same time viable", he told AFP.

The kombi operators -- notorious for reckless driving and disregard for rules of the road -- complain they are being unfairly put out of business.

"The government only subsidised fuel for the buses. They should do the same for our small commuter taxis... so that our fares remain at $1," said kombi driver David Muchada as he touted for passengers.

Another kombi driver who refused to give his name for fear of being targeted by the military in the ongoing security crackdown, said he had not carried any passenger for eight hours.

"How are we expected to look after our families? There are no other jobs in this country," he said.

At the terminus, police and soldiers supervised the movement of buses and passengers.

Elsewhere on the streets, security forces continue to patrol amid reports of ongoing violence, with more than 1,100 people arrested.

The government meanwhile faces an uphill task to lift the economy out of the doldrums. Less than 10 percent of the employable population have formal jobs -- and most of those are in government.

Government workers have also threatened to down tools if their demands for better salaries are not met. The deadline for government to comply expired Friday.

Economists warn that if government bows to the civil servants' demands, the economy could suffer even more serious inflationary pressures.

"The elephant in the room at the moment is the exchange rate," said Gwanyanya, blaming the government for excessive expenditure.

If the exchange rate is not managed properly, "we are going to see this economy getting deeper and deeper into challenges and instability", he said.

Ousted President Robert Mugabe in 2016 introduced a quasi currency called bond notes, which is officially pegged at the same rate as the dollar -- but in real terms is worth around a third of the dollar.