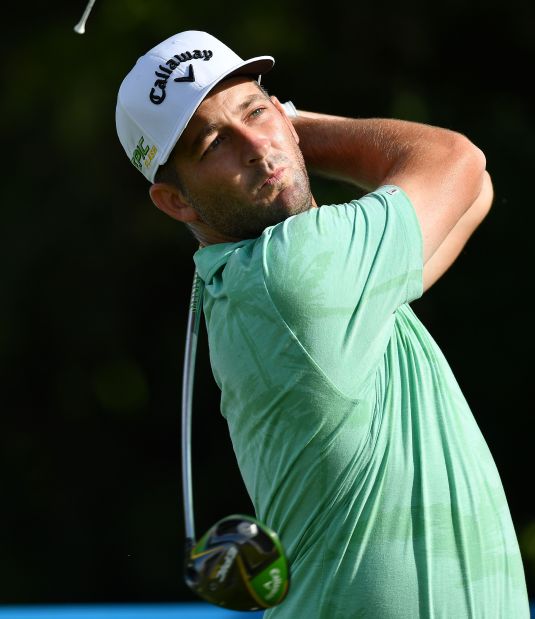 DALLAS, TEXAS - MAY 12: Matt Every of USA plays a shot during the continuation of the weather delayed third round at the AT&T Byron Nelson at Trinity Forest Golf Club on May 12, 2019 in Dallas, Texas. Stuart Franklin/Getty Images/AFP == FOR NEWSPAPERS, INTERNET, TELCOS & TELEVISION USE ONLY ==

Los Angeles: Matt Every pounced on the rain-softened Trinity Forest course to take a one-shot lead midway through the delayed third round of the US PGA Tour’s Byron Nelson on Saturday.

The start of play on the Dallas, Texas, course was delayed six hours because of heavy rain that lasted through the night and into the morning.

When he finally teed off, America’s Every chipped in for eagle at the par-five first, then birdied four holes in a five-hole span to take a one-stroke lead through nine on 18-under par.

When darkness halted play he was one stroke in front of South Korea’s Kang Sung, who matched the course record with a 61 on Friday and took a four-shot lead into the third round.

Kang was one-under for the round after following birdies at the third and sixth with a bogey at the eighth and 17-under for the tournament.

Tyler Duncan, who began the day tied with Every four adrift, was three-under for the day and 15-under for the tournament with nine to play. They’ll return to complete the round on Sunday morning. Only 12 of 83 players finished the third round.

Every, a two-time winner on the PGA Tour, said his front-nine charge felt “like a normal round”.

“It was playing super-easy, so it wasn’t like I had time to be nervous about anything,” he said. “I just had to keep making birdies. I got in a nice rhythm.”

Nicholas Lindheim also took advantage of the rain-softened course. He was nine-under through 15 holes and 12-under for the tournament, tied for seventh after starting the day in 44th.