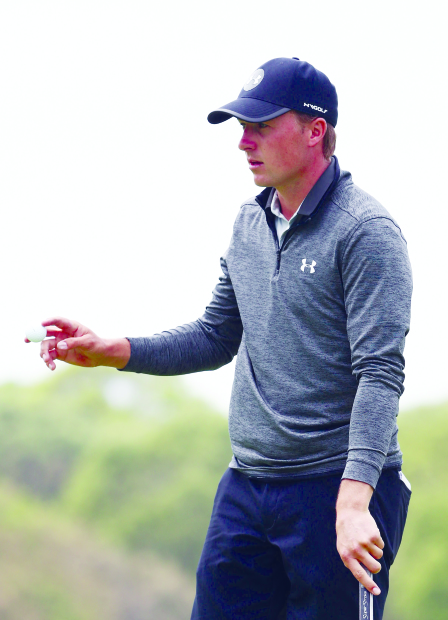 Jordan Spieth reacts to his putt during the second round of the 2019 PGA Championship at the Bethpage Black course on May 17, 2019 in Farmingdale, New York. (Jamie Squire/Getty Images/AFP)

Spieth, who would complete the career Grand Slam with a win this week, overcame some errant tee shots and looked like his old self on the greens as he putted with confidence en route to a four-under par 66 that left him at five under for the week.

The three-times major champion, who arrived at Bethpage Black with just two top-25 finishes all year, began the second round on the back nine and made his sixth birdie of the day at his penultimate hole with a 39-foot putt.

Koepka was among the late starters and went off in the fourth-to-last grouping from the par-four first hole in the company of Masters champion Tiger Woods and British Open champion Francesco Molinari.

World number one Dustin Johnson, playing in the same group as Spieth, recovered from an opening bogey with five birdies over a sizzling stretch that had him two shots back of Koepka after just seven holes.

But Johnson gave one back with a sloppy bogey on the short 18th and missed good birdie opportunities at the first and second holes before a messy three-putt from 89-feet at the par-three third.

The long-hitting American added a late birdie for a three-under-par 67 that left him three shots off the pace along with compatriot Daniel Berger (66), who made an unexpected charge given he has just one top-10 finish in 11 starts this season.

In the clubhouse a further two shots back were New Zealand’s Danny Lee (74) and South Korea’s Sung Kang (70), who five days ago collected his maiden PGA tour win at the AT&T Byron Nelson in Dallas.

Lee, a surprise contender who was six-under and one shot back of Koepka, came crashing back to earth after falling back to even par just seven holes.