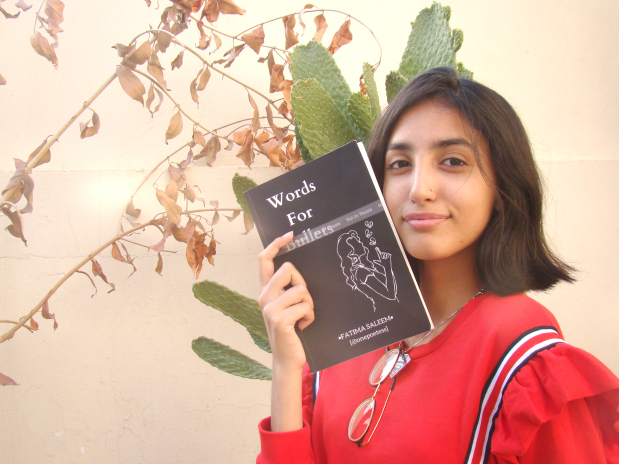 Fourteen-year-old Fatima with her self-published book

A Bahrain-based teenager has published her debut poetry book inspired by mental health.

Fourteen-year-old Fatima Saleem, who was born and raised in Bahrain, also drew inspiration for her poems from challenges facing teenagers in school and life.

Published on Amazon.com, Words for Bullets is a collection of poems that tackle a number of topics including heartbreak, depression and life in general through the eyes of a young girl.

The grade nine student from New Indian School, whose family is originally from Pakistan, said she dreams of travelling the world and inspiring people with her writing.

“One of the reasons I wrote this book is because the topics I have written about are things that most teens go through nowadays but are unable to discuss them because of their age,” she told the GDN.

“Adults neglect such situations because they believe it is just a phase, but it isn’t, it’s real.

“Depression, heartbreak, love – it is all real and happens more often than you would think.

“I would just like to say you are never too young or too old to experience the struggles of life and don’t you dare let anyone tell you so.”

Fatima explained that while her work is inspired by some of the challenges faced by teens, they are not necessarily difficulties she has experienced herself and the poems have been constructed from the situations of those around her.

The self-published book is available to order for BD3.490, with the e-book set for release in July.

“I am looking forward to getting it into bookstores (in Bahrain),” added Fatima. “A few are interested, but currently it is (only) available online for shipping to Bahrain from Amazon.”

Plans are also in the pipeline for a book signing event in Bahrain in late June, however, the arrangements have not yet been finalised.