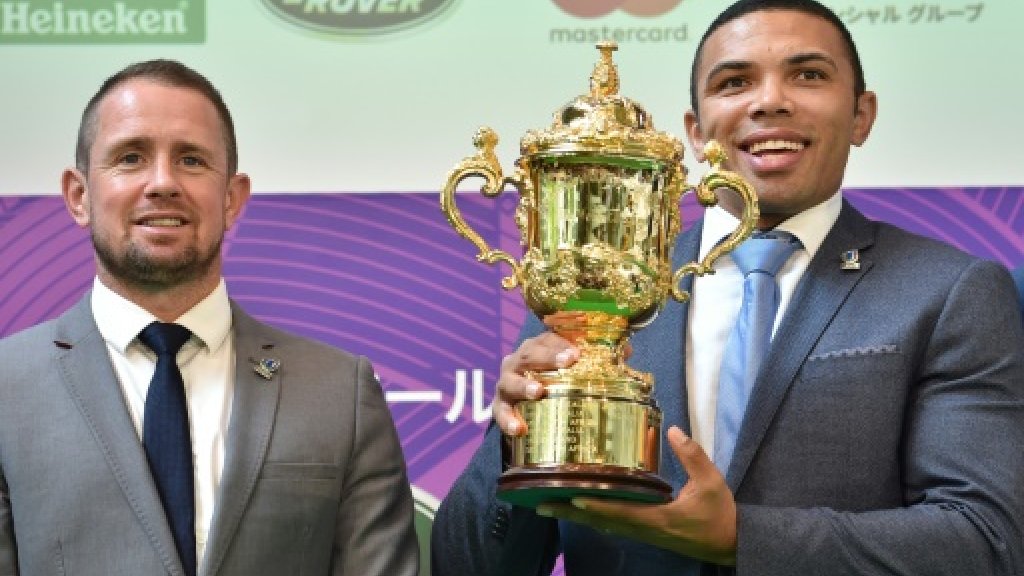 Former world players of the year Shane Williams (left) and Bryan Habana with the Webb Ellis Cup during an event in Tokyo to mark 100 days till kickoff in the Rugby World Cup. (AFP Photo)

Tokyo: Grand Slam winners Wales will never have a better chance of lifting the World Cup than this year, rugby legend Shane Williams said Wednesday as hosts Japan marked 100 days to go before the tournament.

Currently on a record 14-game win streak, Warren Gatland's high-flying side have the confidence and durability to go all the way in Japan, according to the country's greatest try-scorer.

"This is the biggest chance in Welsh history to go on and win the World Cup," said Williams, who reached the semi-finals with Wales in 2011.

"The fact that we've won the Grand Slam just goes to show we have the confidence and the ability to withstand all that pressure," he added.

Williams was speaking at an event in Tokyo to mark the 100-day countdown, where organisers unveiled a countdown clock and flagged off a domestic trophy tour in which the Webb Ellis Cup will visit all 12 host cities.

"Certainly what Wales have is momentum," Williams said. "They don't look like a side that can lose at the moment -- I don't want to jinx them but that's a very good sign.

"To win a Grand Slam in a World Cup year just goes to show that you're doing something right."

Wales, who have shot to second in the world rankings behind defending champions New Zealand, are drawn alongside Australia, Fiji, Georgia and Uruguay in Pool D at this year's tournament, which kicks off on September 20.

Williams insisted there would be no easy games, tipping Fiji and fast-improving Georgia to provide stern tests.

But the 42-year-old backed a "best-ever" Wales side to come out breathing fire, boosted by their Six Nations heroics.

"As a player, the 2011 semi-final was gut-wrenching," said the former winger, recalling the 9-8 loss to France in Auckland.

"We were a good side, but this squad is even better -- they have such strength in depth, no one's position is safe. There's always someone nipping at your heels.

"It doesn't normally happen going into a World Cup that Wales are up there as the favourites," added Williams.

New Zealand will be chasing a hat-trick of titles but Williams believes the Welsh can topple the All Blacks.

"Everyone in Wales is buzzing because this is probably the strongest we've been going into a World Cup. At the same time they know they can improve, so that makes Wales a very dangerous side."

"Inconsistency has probably been their biggest foe," he admitted. "But if you compare it to the run-in to the 2007 World Cup -- we lost 49-0 to Australia a year out and went on to win it. They can definitely be a force to be reckoned with."

Four years ago, Habana was part of the Springboks side which suffered a stunning 34-32 defeat by Japan. He warned there would be no pushovers at this year's World Cup.

"It was probably a one-in-a-million shot that Japan had and they took it," said. "It showed you can't take any game for granted."

Asked to tip a winner, Habana kept his counsel.

"If you'd have asked me that question in January, I would have said Ireland were the team to beat," he said.

"New Zealand will potentially go in as favourites but the special thing about this World Cup is that it really is too tight to call."