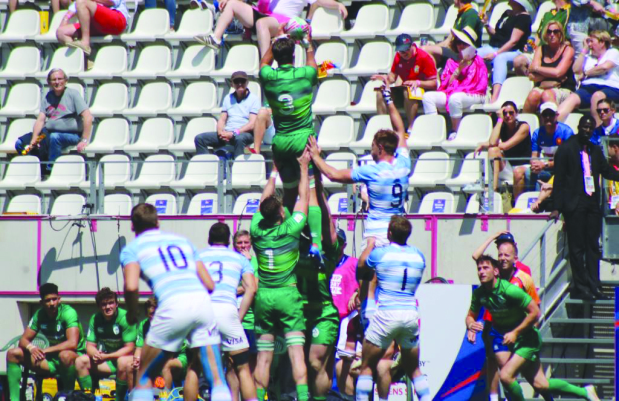 McNulty soars highest to claim a lineout against Argentina in Paris

Bahrain-born Harry McNulty and his Ireland team-mates made a serious statement of intent over the final rounds of this year’s HSBC World Sevens Series, as they look forward to entering the competition as a core team for the first time next season.

After finally clinching a place at the top table of sevens rugby at the series qualifying tournament in Hong Kong back in March, McNulty and co may have been forgiven for taking the foot off the pedal in their guest appearances in London and Paris earlier this month.

That was to be far from the case however, as the Irish outfit instead took the opportunity to any lingering questions around their ability to compete with the elite, with a string of impressive performances and a number of notable victories against some of the heavyweights of the game.

Despite going down to the mighty New Zealand in the fifth-place play-off in London, the Irish side – featuring three series debutants – were good value for their sixth-place finish, after hard-earned victories over England and Scotland in the pool stages and a cup quarter-final in which they pushed Olympic champions Fiji, all the way.

They followed up with another top 10 finish in Paris, where a succession of injuries severely hampered their efforts over a weekend that culminated to defeat to Canada in the Challenge Trophy Final.

An ever-present for the Ireland sevens team, McNulty is already making a name for himself on the sevens scene and will be a marked man when the new season gets underway in October.

Before that though, the 26-year-old has the small matter of Olympic qualification to prepare for, as Ireland head to France in July, looking to earn a place at Tokyo 2020.