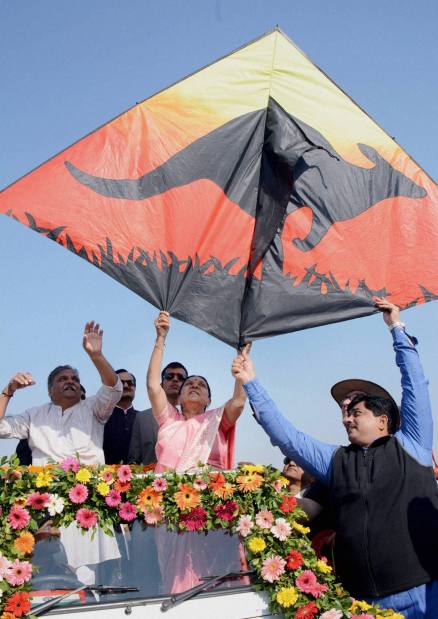 Ahmedabad: The rainbow-like cluster of kites covers the horizon above the stately landscape at Sabarmati river front here where hundreds of people from across the globe have gathered with the motto to conquer the sky.

At the 28th edition of International Kite Festival, the love for the sport binds 98 kite flyers from 31 countries and 55 from India.

Besides, thousands of watchers flock the expansive grounds at the river front which reminds one of Mumbai's marine drive to watch the kites tore though the skies within an unimaginable speed.

World-class kite flyers demonstrate new fangled kites which they manoeuvre like a gymnast in near-perfect synchronicity at the week-long festival.

Graham Lockwood, a retired teacher from Huddersfield in England, does something similar.

He performs synchronised belle with three stunt kites, using his hands and the waist.

He grew interested in kites 20 years ago and had been participating here for last three years.

Lockwood says, "Everyone fly kites here...the sky looks amazing on Uttarayan", giving a hint of Gujarati language which he took up while being in India.

An hotelier from Vietnam, Nguyen Thanh Van started flying kite when he was six and the enthusiasm for it have not changed in last 60 years.

"Our reason for flying kite is similar to that of Indians, we fly kites in the rice fields during the harvest season," Van said.

Van besides being a flyer he is an artisan too who makes his own Flute kites, which were once used to warn villagers about Chinese Qing Dynasty invaders 200 years ago.

Bamboo, is the key piece for this kite which is delight for ears too.

A flute kite consists of two parts including kite and flute, both traditionally were of bamboo but now fibre has replaced it, he said.

He learned kite making from artisans in his village 5 decades ago, now he himself teaches children back home.

A strict vegetarian himself, he says, "the love for the vegetarian food and warmth of people here makes him visit Ahmedabad every year".