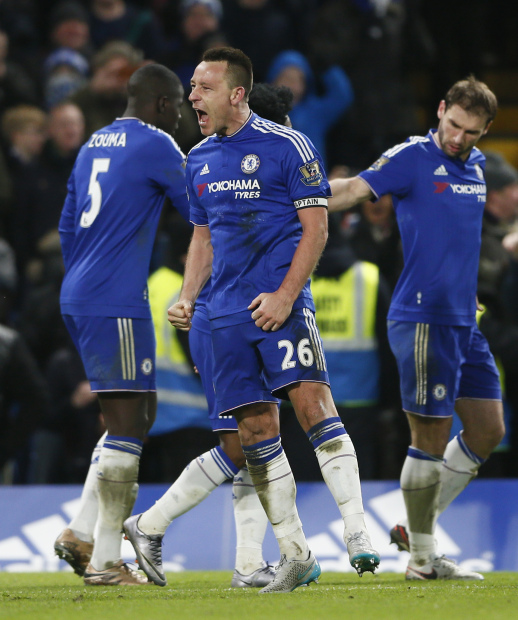 Leicester claimed the summit from Manchester City, who had briefly gone top after beating Crystal Palace 4-0, but former leaders Arsenal can go two points clear if they prevail at Stoke City on Sunday.

Claudio Ranieri's Leicester went ahead in the 28th minute at Villa Park when Okazaki followed in to score after Villa goalkeeper Mark Bunn had clawed away a lob by Jamie Vardy.

Mahrez should have doubled Leicester's lead six minutes later after Aly Cissokho was penalised for blocking his shot with his hand, but his casual spot-kick was deflected away by Bunn.

It was a second unsuccessful penalty in three league games for Mahrez, who was denied by Artur Boruc in the recent 0-0 draw with Bournemouth.

The Algerian's miscue was punished 15 minutes from time when Beninese substitute Gestede bundled his way past Robert Huth and beat Kasper Schmeichel with the aid of a deflection off Wes Morgan.

Fabian Delph had opened the scoring with a skidding 30-yard shot for the hosts, who had left-back Aleksandar Kolarov stretchered off with a calf injury.

"Was it comfortable? No, because you never know in this game," said City manager Manuel Pellegrini.

"To make five changes and to win the way we did today, I think will be very useful for the future."

Champions Chelsea remain six points above the bottom three after interim manager Guus Hiddink avoided the first defeat of his second stint at the club by the narrowest of margins against Everton.

Everton went 2-0 up early in the second half as Terry scored an inelegant 50th-minute own goal and Kevin Mirallas followed up with a slick turn and shot, both goals created by Leighton Baines.

Cesc Fabregas brought Chelsea back into the game, freeing Diego Costa to round Tim Howard and reduce the arrears in the 64th minute before equalising with a deflected shot less than two minutes later.

After Costa had limped off with a shin injury, defender Ramiro Funes Mori put Everton ahead in the 91st minute from Gerard Deulofeu's cross, only for Terry to flick home a last-gasp equaliser despite an apparent offside.

"John Terry is clearly offside," said the Spaniard. "It's a clear-cut decision."

Hiddink conceded: "I can say now he is quite right. Oscar touched the ball and, half a yard, John was offside, even though he made a beautiful goal."

Tottenham Hotspur tasted victory in 2016 at the fourth attempt with a one-sided 4-1 home success over Sunderland in which Christian Eriksen scored twice.

Patrick van Aanholt put Sunderland ahead in the 40th minute, but Eriksen equalised within 91 seconds and further goals from Mousa Dembele, Eriksen and Harry Kane, with a penalty, gave Spurs victory.

Spurs, who occupy the fourth Champions League berth, opened up a five-point advantage over Manchester United, who visit Liverpool on Sunday, and a four-point lead over West Ham United, who lost 2-1 at Newcastle United.

Substitute Nikica Jelavic hit back for West Ham in the 49th minute after intercepting a back-pass from Chancel Mbemba, but Newcastle held on to escape the relegation zone at the expense of Shelvey's old club Swansea.