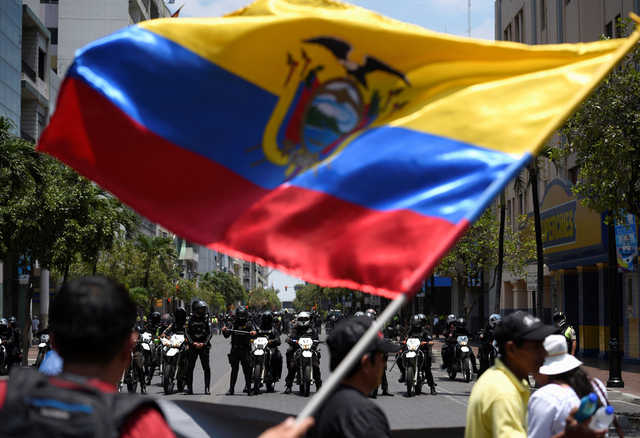 QUITO - Some walked to Quito from the countryside. Others hitched rides in the back of trucks, squeezed between sacks of produce. Many have spent days sleeping outside and eating from communal pots.

Indigenous people at the heart of Ecuador's biggest protests in more than a decade are vowing to stay on the streets unless President Lenin Moreno repeals austerity measures linked to securing a $4.2 billion International Monetary Fund loan.

"We're defending the country. He's doing everything wrong," said Maria Lourdes Castillo, a 26-year-old broccoli picker from the highland province of Cotopaxi as she took off her shoes to rest her feet during a brief break from protests.

Castillo, wearing a traditional bowler hat and layered skirt, said Moreno's decision to end a four-decade subsidy on fuel had already started to push up prices on a wide range of products. "But our wages won't go up. They never do," she said.

Protests that started a week ago burgeoned into a massive nationwide strike on Wednesday, with workers unions joining several thousand indigenous people marching in the highland capital as many more rallied around the provinces.

Indigenous protesters from the provinces have used a cultural center as a base in Quito: teams of volunteers stay ready to tend to the wounded from clashes with police, while older women prepare squash stew in a giant pot.

Many have slept in a park under heavy blankets brought from home.

The marches have forced Moreno to move his government to the coastal city of Guayaquil, where thousands also rallied to support him in counter-protests on Wednesday.

"THE PEOPLE ARE RIGHT"

But Moreno has refused to overturn the measures and has blamed unrest - without evidence - on his leftist predecessor Rafael Correa and Venezuelan President Nicolas Maduro.

Indigenous protesters say Moreno, who has been careful to distinguish between violent troublemakers and his "indigenous brothers", is nevertheless trying to de-legitimize their demands.

"He can blame whoever he wants but he knows the people are right," said Pedro Aranga, a 60-year-old street vendor and a native Quichua Ecuadorean. "This is hurting me and it hurts all of us. We don't have much money to spend."

Aranga said a large sack of potatoes in his local market had risen from $20 to $60 – out of reach for him and many others.

Moreno's government has blamed retail vendors for taking advantage of increased fuel prices to hike food more than necessary. Some police operations have targeted speculation in markets in Quito and Guayaquil.

But what started as a concrete demand to reinstate fuel subsidies has turned into wider protests with many calling for Moreno to step down. The shift is no small thing.

Indigenous protests have been key detonators in pushing previous presidents from office.

Some protesters said Moreno's credibility had already been destroyed by his decision to agree to the IMF loan.

"I voted for Moreno. He said there wouldn't be an austerity package," said Victoriana Quingallo, a 33-year-old potato farmer who traveled to Quito with her children for the protest.

"We're going to stay here until it's all repealed!"