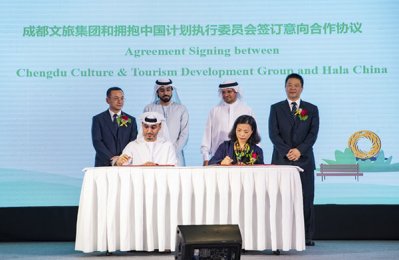 Hala China, a joint initiative between Meraas and Dubai Holding, has signed several memorandums of understanding (MoU) with art and tourism entities from Chengdu - the provincial capital of Sichuan, China.

The signatories of the agreement emphasised their commitment to enhancing economic and cultural exchange and driving two-way investments between the UAE and China.

The agreement will see Hala China work with the Chengdu Culture and Tourism Development Group to promote cultural exchanges and two-way tourism by creating special inbound and outbound tourism packages for its residents. Chengdu is considered the ‘giant panda capital’ of China and is famously home to the Chengdu Research Base of Giant Panda Breeding, a renowned facility that offers visitors rare access to interact with the endangered animals.

The event also featured a performance of bian lian or ‘face changing’, a unique 300-year-old art form that originates from the southwestern province of Sichuan and is an integral element of traditional Sichuan opera.

Mohammed Saeed Al Marzouki, Hala China representative, said: “In just over a year, we have made significant strides in establishing Hala China as a key driver of the thriving UAE-China relationship. Today’s agreement will continue to deliver on our mandate and develop our role as we move forward with progressive intent. There is a high uptick for exchanges in culture, tourism and academia in our two countries, and Hala China is working to meet that demand.”

Zhou Wansheng said:  "President Xi Jinping’s trip to the UAE in July 2018 marked the first visit of a Chinese leader to the country in 29 years. Since the inception of Hala China last year, Chinese arrivals into Dubai have risen by 12 per cent. These are clear signs that the UAE-China relationship is progressing apace."

Prompted by the efforts of Hala China, Chengdu government officials invited Dubai's flagship Jumeirah Hotels and Resorts to establish their presence in the Sichuan Capital.

Following the second annual ‘China Film Week in Dubai’, Chengdu officials expressed a keen interest to participate and take on a greater role for the next edition. The Chinese city is already home to the famed Emei Film Production studio. As one of the largest in China, it has produced over 300 movies and 1,500 TV episodes, many of which have won critical acclaim. The Chengdu municipality will also encourage over 3,000 film students, directors and producers to visit Dubai to experience the emirate’s world-class facilities first hand.

Chengdu, the capital of the Sichuan province, is the fifth most populous city in China with a population of over 15 million. In 2011, it was the first city in Asia to be recognized as a City of Gastronomy by UNESCO and is regarded as the capital of Chinese cuisine. With over 4,000 years of history, it is well known for its rich historical and cultural background. In 2018, Chengdu airport hosted over 50 million international passengers. With the joint efforts of Chengdu Municipal Bureau of Culture, Radio, Television and Tourism, Chengdu Culture and Tourism Development Group and Hala China, Chengdu’s charm will be introduced to more local residents in Dubai.

In its first year, Hala China organised a variety of high-profile events and activities that attracted the interest of the Chinese community in the UAE, as well as a growing influx of Chinese businesses entering the Middle East markets. Furthermore, UAE-based Chinese enterprises also participated in large numbers to capitalise on the new and exciting opportunities.