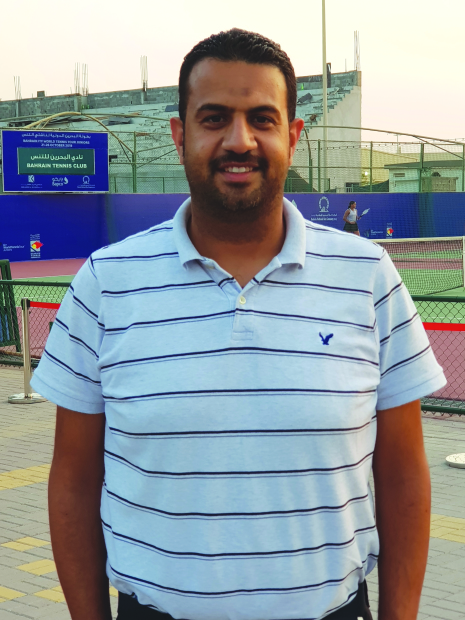 The day is not far when a Bahraini will officiate at a Grand Slam tennis tournament, writes BINU SAMUEL.

Ahmed Al Hawaj, who is the tournament referee at the ongoing ITF championship at the Bahrain Tennis Club (BTC), has set his sights at the summit – officiating at Grand Slams.

He was initiated into tennis at a young age, wielding the racquet as a 10-year-old. His tennis life came to a brief halt when, in 2003, he went to Pune, India for university education.

The interruption only served to strengthen his passion for the game and, on returning to Bahrain, Al Hawaj took up tennis with newfound gusto.

“I started off as a tennis official in 2007, at local events,” said Al Hawaj. He got national level certification from Doha in 2013 and, two years later, secured the referees’ white badge in Bangkok. The chair umpire certification was done in Cape Town, South Africa.

He officiates at ITF junior and senior tournaments and serves as assistant referee in some world tour men’s tournaments.

“As a chair umpire I can officiate at challengers and all ITF tournaments while as a referee I have specific tasks related to my badge like ITF junior, senior and wheelchair events. Besides, I serve as assistant referee for ITF men’s and women’s circuit,” said Al Hawaj.

“I have officiated at Wimbledon qualifying events as well as Australian Open junior qualifiers.”

Al Hawaj puts his achievements so far down to sheer hard work. “I had the backing of the Bahrain Tennis Federation and BTC, but there is no substitute for hard work,” smiled Al Hawaj.

He is now eyeing the silver level certification as a referee and bronze badge as chair umpire.

“The silver badge will enable me to be part of the ATP Tour and the ITF circuit as a referee,” said Al Hawaj. “The bronze certification will be an upgrade in my qualification, giving me priority in being selected for major tournaments.”

The shift to the higher level is bound to take place in a couple of years, says Al Hawaj. That will be followed by the pinnacle of tennis umpiring – the gold badge.

“That’s my ambition,” said a determined Al Hawaj. “I hope to be there one day.”