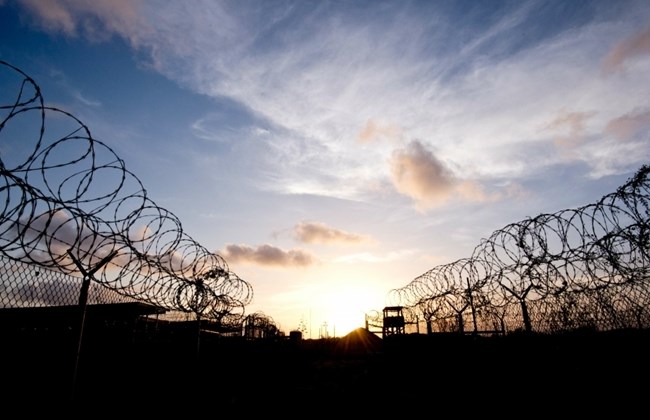 This April 9, 2014 file photo made during an escorted visit and reviewed by the US military, shows the razor wire-topped fence and a watch tower at the abandoned "Camp X-Ray" detention facility at the US Naval Station in Guantanamo Bay, Cuba. (AFP Photo)

Geneva: Australia violated the rights of former Guantanamo Bay inmate David Hicks by jailing him after he was sent home from the notorious US prison, a panel of 18 UN rights experts said on Wednesday.

Hicks, an Australian national, was arrested in Afghanistan in 2001 and held at Guantanamo Bay from January 2002 to May 2007, when he pleaded guilty to providing material support to Al-Qaeda.

His plea deal included a nine-month sentence that Hicks was allowed to serve in Australia, but, according to the UN experts, Australia never should have imprisoned him given the serious questions surrounding the legitimacy of his conviction by a US military tribunal.

"By the time Mr. Hicks was transferred, there was a lot of information available that raised serious concerns about the fairness of the procedures by the US Military Commission," Fabian Salvioli, head of the United Nations human rights committee said in a statement

"That should have been enough to cast doubt among the Australian authorities as to the legality and legitimacy of the sentence imposed on him," he added.

A US appeals court quashed Hicks' conviction last year, on grounds that the offence of material support for terrorism was not a war crime and could not be tried by a military court.

That court also called on Canberra to pay Hicks' medical bills. The ex-detainee has said he is suffering from many health problems which he links to the affects of alleged torture at Guantanamo.

The UN experts, who probed the case following a request from Hicks, said in the statement that the sentence imposed on him in the US plea bargain deal was "flagrant denial of justice."

"Transfer agreements are important, because they allow prisoners convicted abroad to serve their sentences in their own country," Salvioli further said.

"But States should not carry out a sentence if there is ample evidence that the trial clearly violated the defendant's rights, as was the case with Mr. Hicks," he added.

Hicks has admitted to taking part in paramilitary training in Afghanistan and Pakistan, as well as conflicts in Kosovo and Kashmir but maintains he never had extremist intentions.