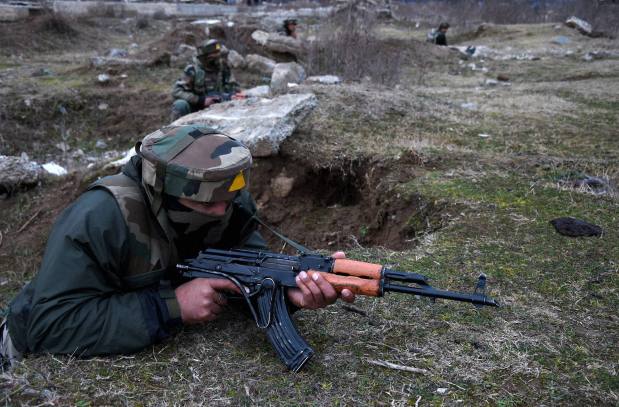 A security forces personnel takes position outside the JKEDI building where militants have reportedly taken refuge after launching an attack on a CRPF convoy at Sampora Pampore, near Srinagar on Saturday. (PTI Photo)

Srinagar, India: A handful of rebels holed up in a building in the Indian portion of Kashmir exchanged fire with government forces for the second straight day Sunday, raising the number of dead to three soldiers and one civilian. Another 13 paramilitary troops have been wounded.

The rebels, numbering two to three, fired guns and grenades early Sunday as Indian commandos tried to storm the government building where they have been hiding since Saturday, said paramilitary spokesman Bhavesh Chaudhary.

Anti-India protests and clashes broke out Sunday in several neighborhoods in the saffron-rich Pampore area, where the militants are holed up.

Witnesses and officials said hundreds of youths, chanting "Go India, go back" and "We want freedom," ignored the appeals from police to stay away from the site of the gunbattle and hurled rocks at police and paramilitary soldiers.

Anti-India sentiment runs deep in Kashmir, where rebel groups have been fighting since 1989 for either independence or a merger with neighboring Pakistan.

On Saturday, the militants fired automatic rifles as they ambushed a convoy of Indian paramilitary soldiers before taking refuge in the nearby government building. They allowed more than 100 civilian government employees to leave the building without any harm.

India and Pakistan each administer a portion of Kashmir, but both claim the region in its entirety.

More than 68,000 people have been killed in the armed uprising and ensuing Indian military crackdown since 1989.

India and Pakistan have fought three wars, two of them over control of Kashmir, since they won independence from British colonialists in 1947.