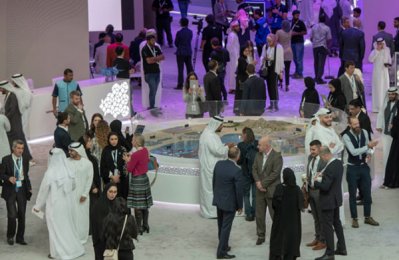 Around 33,500 attendees including buyers, distributors, project owners and consultants from 170 countries are expected to take part in the World Future Energy Summit (WFES) taking place in Abu Dhabi, UAE in January.

Additionally, the event hosts more than 200 qualified regional project buyers, who are looking for the latest technologies and innovation to use in their current projects.

Organisers have confirmed that over 90 per cent of the exhibitor space is sold out for the summit running at the Abu Dhabi National Exhibition Centre (Adnec) from January 13 to 16.

There are also eight countries confirmed to host national pavilions at the event, to promote companies or projects in their markets to an international audience.

With an exhibitor footprint extending from Europe to Asia, into Africa and the Indian subcontinent, and as far as North America, the World Future Energy Summit covers all major nations supplying technology for renewable energy, water, waste, and smart cities.  For 2020, the Netherlands will join those countries with a dedicated pavilion on the exhibition floor, alongside Germany, Japan, China, South Korea, Switzerland, India, and France.

Leading renewable energy developers and suppliers exhibiting at the World Future Energy Summit are bullish on the Middle East market.

“The World Future Energy Summit is a major event for LONGi to meet government, industry experts, and customers to better understand their needs and develop our business to create value in this fast-growing market,” Wang added.

“We continue to see a significant increase in international interest for both the event itself and for the region’s efforts in advancing sustainability,” said Grant Tuchten, group event director, World Future Energy Summit.

“The market for renewable energy has grown exponentially since our first event in 2008. It is now a prime driver for economic growth, and Abu Dhabi provides a meeting point for some of the most exciting markets in renewables today, with billions of dollars in business opportunities on the table. At the 2019 event, around $10.5 billion worth of projects were announced on-site.”

While the UAE remains the leading Middle East market for installed renewable energy capacity, other GCC states are following quickly. Saudi Arabia aims to achieve 3.45GW of renewable energy next year, rising to 9.5GW by 2023 – about 10 percent of total capacity – combined with reductions in consumption.

Some countries are also looking beyond solar, with Kuwait, Oman, and Saudi Arabia all having significant wind potential. Across the Mena region, Irena calculates total ambitions to achieve around 80GW of installed renewable capacity by 2030, based on individual countries’ national targets.

Along with being the Middle East industry’s most important event, the World Future Energy Summit is also recognised as an international showcase for India’s ambitious renewable energy target of 450GW of renewable energy output by 2030. According to government sources, around 83GW of clean energy is now installed, and authorities believe they can more than double the current output to reach 175GW by 2022.

Beyond the exhibition halls, the World Future Energy Summit brings together many of the world’s leading government, business, and industry leaders, to discuss the latest developments in energy, water, solar, waste management, and smart cities.

During the 2020 edition, forum sessions throughout the four-day event will touch upon a range of energy and sustainability challenges faced by countries in the region and across the world. The 2020 programme will explore the impact of innovative technologies such as AI and blockchain on energy transition, as well as solar projects, sustainable waste management, the importance of circular economies, smart cities, and clean transport.

The 2020 edition also reaffirms its commitment to supporting innovation and start-ups, with the Climate Innovation Exchange (CLIX) returning for its third edition. The global start-up marketplace, which is hosted by the UAE Ministry of Climate Change & Environment, will showcase 42 of the world’s most disruptive innovations from 1,402 global submissions from 128 countries related to energy, food, agriculture and space. – TradeArabia News Service