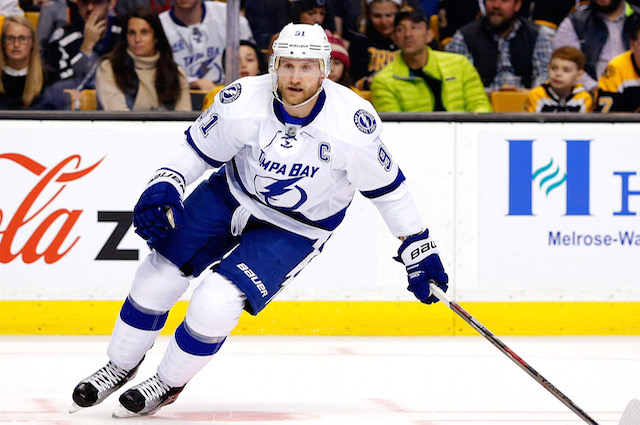 The Tampa Bay Lightning have won a franchise-record nine straight games, perhaps none as thrilling as Saturday night, after they rallied to force overtime before centre Alex Killorn's goal with 42 seconds left resulted in a 4-3 victory over the Carolina Hurricanes at Amalie Arena.

The Lightning broke the team mark set during their run to the Stanley Cup championship in 2004. Carolina had rallied from a goal down to take the lead in the third period but couldn't hold on for the road win.

Killorn's goal -- his 13th of the season -- came with 42 seconds remaining in overtime after both goalies had denied multiple strong scoring opportunities in a chaotic three-on-three overtime.

Washington got a goal from Matt Niskanen in overtime against Boston.

Niskanen slapped his fifth goal of the season past Tuukka Rask at 2:24 of the overtime as the Capitals reached 100 points for the season.

Philipp Grubauer made 33 saves, 20 of them in the second period, as the Capitals completed their second straight 3-0 season sweep of the Bruins.

Mark Scheifele had a hat-trick as Winnipeg ended a six-game skid.

Scheifele's third goal was an empty-netter with 29 seconds left in the game. It was the third-year centre's first NHL hat-trick, and he now has a team-leading and career-high 20 goals for Winnipeg.

Rookie Andrew Copp added his third goal of the season. Alex Galchenyuk scored his 20th and 21st goals of the season for the Canadiens.

Bobby Ryan, Marc Methot and Zack Smith had goals for Ottawa in a win over Toronto.

Smith scored the winner at 17:45 of the third period.

Gudas ignited and punctuated Philadelphia's explosion while setting career highs in goals and points in a game as fans chanted his name during the third period.

The Flyers have won four of five during a six-game homestand and are within three points of the Pittsburgh Penguins for the Eastern Conference's final wild-card spot.

Jakob Silfverberg had a goal and an assist and Fredrik Andersen made 32 saves as Anaheim extended its team-record winning streak to 11 games.

Anaheim is 17-1-1 since Jan. 7 and gained sole possession of first place in the Pacific Division after once trailing the Kings by as many as 16 points in mid-January.

Joe Colborne scored a goal and set up Lance Bouma's game-sealing goal in the third period and Calgary ended a seven-game losing streak.

The Flames, who had won only once in 11 games since Feb. 11, got a solid effort in net from Joni Ortio in his first win of the season while handing Penguins goalie Marc-Andre Fleury only his second regulation-time loss at Consol Energy Centre since Jan. 1.

Filip Forsberg had a goal and an assist, and Shea Weber and Mikka Salomaki scored empty-netters for Nashville. Pekka Rinne stopped 34 shots for the Predators.

Nashville has been one of the hottest teams in the NHL to move securely into the first wild card in the Western Conference. The Predators have not lost in regulation since a 5-3 setback against Washington on Feb. 9 and are 8-0-4 in that span.

Jason Pominville scored in the fourth round of the shootout to lift Minnesota over Buffalo.

The former Sabres captain beat goalie Robin Lehner with a wrist shot to the glove side on the winning attempt. Charlie Coyle and Jack Eichel scored earlier in the shootout to force the extra round.

Aaron Ekblad scored for Florida, which hasn't won in Arizona since the 1999-2000 season. Al Montoya had 21 saves for the Panthers, who went 1-3-1 on their five-game road trip and have fallen out of first place in the Atlantic Division.

Vancouver defenseman Dan Hamhuis scored his first goal of the season to break a tie midway through the third period to lead the Canucks to a 4-2 win over the San Jose Sharks.

The first three Canucks' goals came on the power play as the Sharks took an uncharacteristic bad number of penalties.

Conversely, San Jose went 0-for-3 on the power play, hardly generating anything from its chances, to see a three-game winning streak snapped.