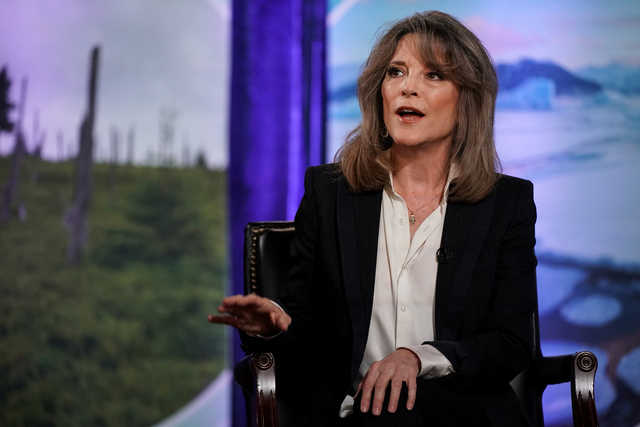 Williamson won admirers if not voters with a spirituality-focused campaign that promoted a politics of love and of conscience. She advocated a Department of Peace and embraced an economic justice agenda to repair damage done by so-called trickle-down economics.

In a Facebook statement, Williamson said she was suspending her campaign, because she would not be able to get enough votes to "elevate our conversation any more than it is now."

The best-selling author and motivational speaker had called for $100 billion in reparations for slavery to be paid over 10 years, gun control, education reform, and equal rights for lesbian and gay communities.

Her signoff on Friday mirrored her campaign message: "A politics of conscience is still yet possible. And yes ... love will prevail."

Williamson made a name for herself on Oprah Winfrey's show and became a "spiritual guide" for Hollywood.

She was a long shot to win the nomination, but the faithful following for her spiritual guidance books helped her qualify for early debates in the crowded Democratic contest.

The Texas native produced a viral moment during a July debate when she warned of Trump's "dark psychic force" after Democrats debated their various policy positions.

"If you think any of this wonkiness is going to deal with this dark psychic force of the collectivised hatred that this president is bringing up in this country, then I'm afraid that the Democrats are going to see some very dark days," she said.

Williamson did not talk like a politician. At rallies she spoke of "energies" and the nation's "deep goodness." "Turning love into a political force is not a pipe dream; it is simply a choice," she said on her website.

Williamson had one of the smallest campaigns and did not qualify for any of the presidential debates after the summer.

At the July debate in Detroit, she had one of the loudest applause lines when she pointed to the water crisis in the nearby majority-black city of Flint, Michigan, to highlight racial and economic injustice.

"Flint is just the tip of the iceberg," she said. "We have communities, particularly communities of color and disadvantaged communities all over this country, who are suffering from environmental injustice."