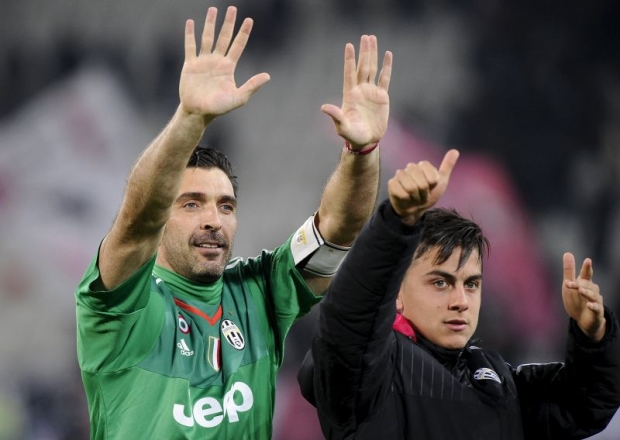 Match winners Buffon (left) and Dybala celebrate at the end of the match, Buffon’s not having conceded a goal in 926 minutes a mere three minutes short of the Serie A record set in 1994. (Reuters Photo)

Turin: Juventus forward Paulo Dybala scored another exquisite goal and goalkeeper Gianluigi Buffon kept his 10th successive clean sheet in the league to give the Serie A leaders a 1-0 win over Sassuolo on Friday.

Dybala curled a shot in off the inside of the post for his 14th league goal of the season to put Juve, chasing a fifth successive title, on 67 points and six clear of Napoli who visit Palermo on Sunday.

Buffon, 38, has not conceded a goal in 926 minutes and is three minutes short of the Serie A record set by Sebastiano Rossi for AC Milan in 1994.

The 2006 World Cup winner Buffon, last beaten by Antonio Cassano of Sampdoria on Jan. 10, had to be on his toes as he made two difficult saves to deny the dangerous Nicola Sansone as Sassuolo pressed in the last 20 minutes.

Sassuolo were the last team to beat Juve in the league on Oct. 28 and the leaders, who said that defeat shook them out of their complacency, have won 18 and drawn one of 19 games since then.

Dybala nearly got Juve off to a flying start with a vicious, dipping shot that Andrea Consigli tipped over the bar.

Consigli also saved Alex Sandro's header with his feet but Sassuolo, who are seventh on 44 points, missed the chance to go ahead when Alfred Duncan shot wide after 20 minutes.

Dybala showed him how it was done in the 36th minute when he curled the ball into the net off the inside of the post from 20 metres after Juan Cuadrado raced down the flank and laid the ball back to the Argentine.

"It wasn't my best ever goal, I scored a similar one once for Palermo, but it wasn't bad," Dybala told reporters. "We fell away a little in the second half but today's win was really important."

Juve attacked relentlessly for the first hour but Sassuolo refused to lie down and put them under pressure in a tense finale.

Sansone was always dangerous, first testing Buffon with a snap shot and then breaking forward and nearly catching him out with an effort the veteran struggled to parry.

Buffon overtook Dino Zoff's second-best Serie A mark of 903 minutes without conceding a goal and can break Rossi's record against neighbours Torino on March 20.