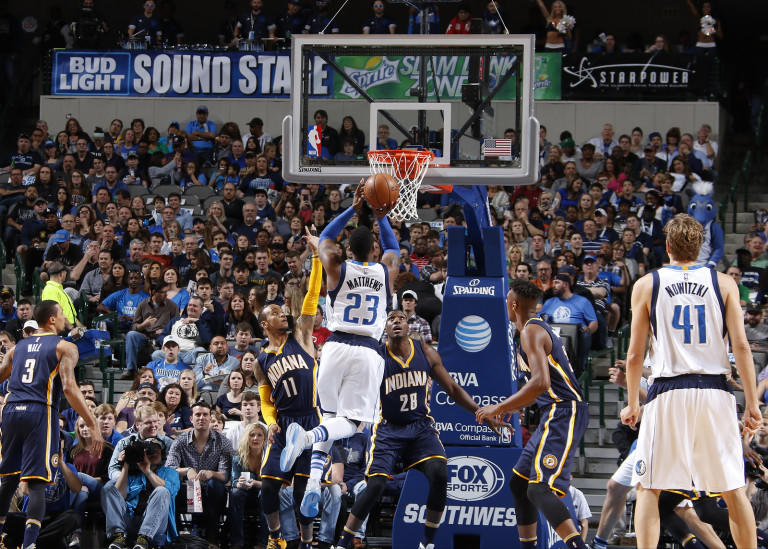 Indiana star Paul George shook off a cold-shooting first half, George Hill knocked down three crucial 3-pointers and three players with Dallas ties helped the Pacers knock off the struggling Mavericks 112-105 in a rare Saturday matinee.

That is when Hill, who finished with 16 points, went around the horn, hitting three consecutive 3-pointers, first from the corner, then straightaway and finally from the other corner.

Kemba Walker scored 26 points and Marvin Williams added 25, and the Charlotte Hornets ran their winning streak to seven straight with a 125-109 victory over the Houston Rockets on Saturday night.

Walker bounced back from an off-night in a win over Detroit on Friday by hitting 11-of-16 of from the field with four 3-pointers. He also had six assists and five rebounds.

DeMar DeRozan poured in a game-high 38 points as the Toronto Raptors defeated the Miami Heat 112-104 in overtime on Saturday night at Air Canada Centre.

Khris Middleton scored 19 points and Giannis Antetokounmpo added 18 to lead the Milwaukee Bucks to a 103-92 victory over the New Orleans Pelicans Saturday evening at the Bradley Centre.

After watching Antetokounmpo record three triple-doubles over the last month, Middleton spent his Saturday night flirting with one but fell just short, finishing with 10 rebounds and eight assists.

Kawhi Leonard scored 26 points and LaMarcus Aldridge added 24 as the San Antonio Spurs came from behind in the fourth quarter to beat the Oklahoma City Thunder 93-85 on Saturday in a matchup between the teams with the second- and third-best records in the Western Conference.

San Antonio trailed by two points after three quarters but dominated the final period as Leonard and Danny Green poured in back-to-back 3-pointers to break open a tie game and gave the Spurs a lead they would not relinquish. Oklahoma City went the final 3:53 without a field goal and missed nine of its last 10 shots.

Reggie Jackson had 24 points and 10 assists, and Kentavious Caldwell-Pope notched seven of his 23 points in a pivotal run beginning late in the third quarter as the Detroit Pistons beat the short-handed Philadelphia 76ers 125-111 on Saturday night.

Tobias Harris added 21 points for Detroit, which won for the third time in four games.

Jusuf Nurkic tied a career-high with 17 points to spark a second-half comeback, and the Denver Nuggets rallied to beat the Washington Wizards 116-100 on Saturday night.

Darrell Arthur, D.J. Augustin and Gary Harris also scored 17. Will Barton had 14 points and 10 rebounds for the Nuggets, who extended their winning streak to a season-best four games.

Guard Damian Lillard scored 19 points and dished out 10 assists as the Portland Trail Blazers blew away the Orlando Magic 121-84 Saturday night at the Moda Centre.

Lillard led six players in double figures for the Trail Blazers (35-32), who got 18 points apiece from Allen Crabbe and CJ McCollum. Meyers Leonard contributed 13 points and Gerald Henderson and Al-Farouq Aminu 11 apiece in Portland's most one-sided victory of the season.

Stephen Curry bombed in 3-pointers early and late in a 14-0, fourth-quarter run Saturday night, helping the Golden State Warriors escape an upset bid by the Phoenix Suns with a hard-earned 123-116 victory.

Playing without NBA Finals Most Valuable Player Andre Iguodala, who sprained his left ankle in Friday's win over Portland, the Warriors (59-6) were able to overcome a 10-point, third-quarter deficit en route to their 48th consecutive home win, their 30th in a row this season.