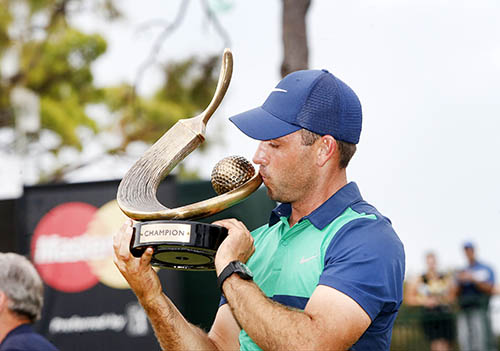 Schwartzel won his 15th professional title worldwide, his first since last month’s European Tour Tshwane Open and his first in a US event since he birdied the last four holes at Augusta National to win his first major title five years ago.

Haas was right of a cart path with his tee shot on the first playoff hole, the par-4 18th, and found a bunker with his second shot while Schwartzel landed his ball in the middle of the green.

Haas, 33, blasted out to 25 feet with his third shot while Schwartzel, 31, left his birdie putt two feet short. Haas tapped in for bogey but Schwartzel tapped in for par and the triumph.

Schwartzel made the greatest last-day rally to win in tournament history, one better than the four-stroke comeback of Australian John Senden in the 2014 final round. Haas and Schwartzel each finished 72 holes at the Innisbrook resort’s Copperhead course on seven-under par 277 after 54-hole leader Haas shot a 72.

Schwartzel birdied three of the last six holes in regulation to fire a four-under par 67, the day’s low round. He missed by inches on a 40-foot birdie putt at 18.

“That was a really good round,” Schwartzel said. “I think everyone’s goal was just to keep bogeys off the card. You were just surviving. It was just really tough.”

American Ryan Moore, who parred the last 12 holes, was third on 279 with 22-year-old amateur Lee McCoy, the playing partner of world number one Jordan Spieth on Sunday, fourth on 280.

Spieth, the reigning US Open and Masters champion, faded quickly out of contention. He took a bogey at the second, birdied the par-5 fifth, but made double bogey at the par-3 eighth and a bogey at 11 to doom his title bid, shooting a 73 to share 18th on 284.

McCoy, whose boyhood home was near the first tee, sank a 28-foot birdie at the 12th and a tap-in birdie at the par-5 14th on the way to a 69 to finish on 280, becoming only the fifth top-five amateur finisher in a PGA event since the tour’s last amateur winner, Phil Mickelson in 1991 at Tucson.

“Surreal to say the least,” McCoy said. “I’ve just always dreamed of getting a tee time here. To be in contention playing with the number one player in the world was just unbelievable. I had to pinch myself several times.”

Haas led at eight-under when the day began and sank an 18-foot birdie putt at the second. He stumbled with bogeys at the third and par-3 fourth and found a greenside bunker on his way to a bogey at the ninth, making the turn at six-under just one ahead of Moore with five others only two adrift.

Schwartzel sank a 64-foot birdie putt at the par-3 13th – saying, “that was just perfect” – to pull within a stroke but a tap-in birdie by Haas at 11 boosted the American’s edge and an 11-foot Haas birdie putt at the 12th stretched his lead to three strokes.