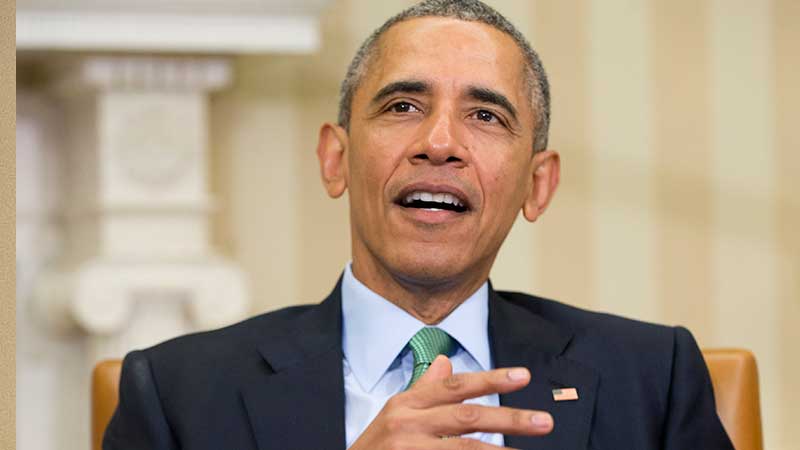 President Obama speaks during his meeting with Irish Prime Minister Enda Kenny in the Oval Office on Tuesday. (AP Photo)

Washington: Barack Obama warned on Tuesday that the 2016 race for the White House is damaging America’s image abroad, sounding the alarm on harsh campaign talk that risks eroding gains seen during his presidency.

Lashing out at “vulgar and divisive rhetoric” in the race to replace him, Obama told a bipartisan group of legislators “this is also about the American brand.”

“The world pays attention to what we say and what we do,” Obama said in an early Saint Patrick’s Day address, flanked by the Irish prime minister. “Why would we want to see that brand tarnished?”

It is the latest intervention from Obama over the tenor of the White House race and the populist message of its Republican frontrunner Donald Trump.

As the controversial businessman has ascended toward the Republican presidential nomination, concern has risen in the White House about the impact of his outbursts.

Trump is expected to take a step closer to becoming the party’s White House candidate on Tuesday, when states from Florida to Ohio hold primary votes.

Improving America’s image abroad has been a major boon for Obama’s presidency, allowing him to speak more forcefully in places from Indonesia to Ghana.

“Overall attitudes across the globe towards the US are a lot more positive today than they were during the George W Bush era,” he said, while noting the trend is not universal.

Obama’s efforts may now be at risk.

Trump’s promise to build a wall on the Mexican border and “make” Mexico pay for it has already elicited angry responses.

The UN High Commissioner for Refugees, Filippo Grandi, on his first visit to Washington since taking up the post, also voiced disquiet on the debate over migrants.

“This is a very important part of US leadership in the world,” he said.

“So, since every candidate is talking about US leadership, this is part of it.”

Dan Restrepo, who for six years was Obama’s top adviser on Latin America, said that “a president Trump would obviously have profoundly negative implications for relationships in the Americas.”

But he said that if Trump’s ideas are rejected, “at that point the vitality of the democratic institutions in the United States will have been reaffirmed, and that could be beneficial.”