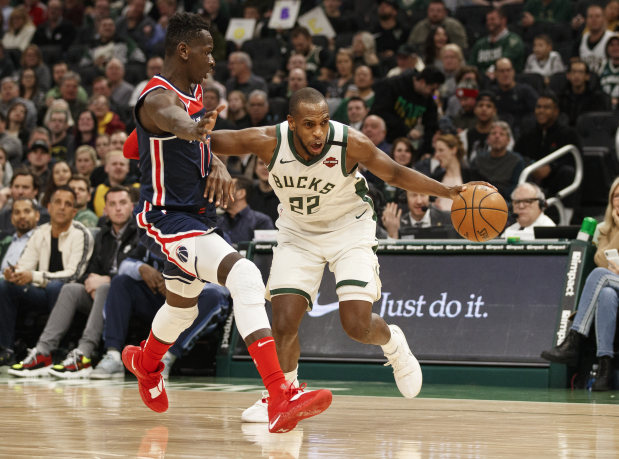 Khris Middleton scored a career-high 51 points, Milwaukee recorded a franchise-record 88 first-half points, and the Bucks held off a second-half surge to beat the visiting Washington Wizards 151-131 on Tuesday.

Despite playing without reigning Most Valuable Player Giannis Antetokounmpo, who missed the contest to rest a sore right shoulder, Milwaukee burst to a season-best 42 first-quarter points.

The victory was the Bucks' ninth straight, and Milwaukee improved the best record in the NBA to 41-6. Washington fell for the sixth time in eight games despite Bradley Beal scoring a season-high 47.

The 88 points smashed Milwaukee's previous season high of 76 first-half points set just 12 days ago prior in a 128-123 defeat of the Boston Celtics, and it marked a league high dating back to Houston's 90 at Phoenix on November 16, 2017.

Embiid had been out with a dislocated ring finger on his left hand. He came out wearing No. 24 in memory of Kobe Bryant, who died in a helicopter crash on Sunday. Embiid received permission from Bobby Jones, who previously wore No. 24 and had his jersey retired by the Sixers.

Raul Neto scored 19 points, Ben Simmons added 17, Tobias Harris contributed 14 and Al Horford had 12 points, 11 rebounds and eight assists for the Sixers, who improved to 22-2 at home. D'Angelo Russell had 28 points and seven assists for the Warriors.

John Collins had 28 points and 12 rebounds and Trae Young added 18 points and 13 assists for Atlanta, which has lost 10 consecutive games against Toronto. Former Raptor Vince Carter, who received a video tribute and a standing ovation, scored 10.

Ja Morant scored 14 points, Brandon Clarke had 12 and Jaren Jackson Jr. finished with 10 points and a career-high-tying seven blocked shots for the Grizzlies, who never trailed. Memphis has won 10 of 13 in January.

Nikola Jokic had 25 points and 13 rebounds, Jerami Grant scored 21 along with a career-best six 3-pointers, and Gary Harris added 10 points for Denver.

Gordon Hayward tallied a game-high 29 points to lead Boston to a win at Miami.

Goran Dragic led Miami with 23 points. Jimmy Butler had 20 points, and Bam Adebayo contributed 16 points and 10 rebounds for the Heat, who are 5-5 in their past 10 games and played their third game in five days. Miami fell to 21-3 at home.

JJ Redick scored 15 while rookie Zion Williamson had 14 points and fell one rebound short of his second straight double-double while playing a season-high 30 minutes.

Devin Booker scored 32 points and Deandre Ayton added 31 as Phoenix got off to a hot start and then used a big third quarter to finish off a blowout road victory over Dallas.

Kelly Oubre Jr. scored 19 points and Mikal Bridges added 13 as the Suns won their fourth road game in their past five tries primarily due to a 48-point third quarter.

Luka Doncic scored 21 points for the Mavericks, who lost for the third time in their past five games and dropped their second consecutive home game.

The Hornets used a 10-0 run that concluded early in the fourth quarter to jump ahead and grasp control of the game.