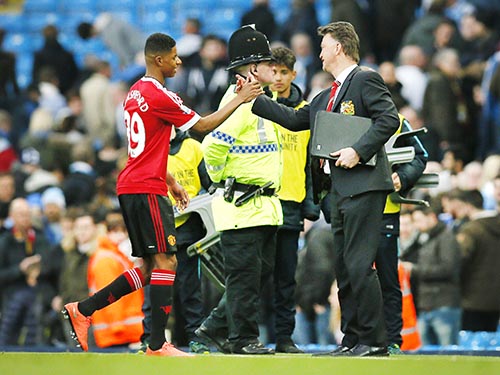 Manchester: Manchester United manager Louis van Gaal believes that his team have a “big chance” of finishing in the Premier League’s top four following their 1-0 win at Manchester City.

United’s season looked to be on the rocks after they were knocked out of the Europa League by Liverpool last Thursday, but teenage striker Marcus Rashford’s clinically taken 16th-minute strike got them back on track at the Etihad Stadium in Sunday’s derby.

As well as ending a run of four games without victory in all competitions, the result took United to within a point of City, who currently occupy the fourth and final Champions League berth, and Van Gaal is confident that his team can outstrip their local rivals over the eight-game run-in.

“I have said that we must win this game and we have done it, so I am very happy,” said the Dutchman, whose day had begun with fresh press reports linking Jose Mourinho to his position.

“Because otherwise the gap was too big if they won or a draw (and the gap) is still four points, eight matches to go, then it should be very difficult.

“Now it is in our own hands. We have to win our games. We have more home matches than away matches. We don’t lose so much at Old Trafford, so we have a big chance.”

City were missing defensive duo Vincent Kompany and Nicolas Otamendi and Rashford gave stand-in centre-back Martin Demichelis a torrid time, streaking past him to score the game’s only goal.

With five goals in eight games, Rashford has taken to life at Old Trafford with an ease that belies his 18 years of age, but Van Gaal batted away talk that he has played himself into England contention.

“I don’t want to interfere and we don’t have to exaggerate neither,” he said.

“Last week there were questions why I let him stay in the media and now I get the question that he has to play in the national team.”

Van Gaal said he did not know whether captain Wayne Rooney will be fit to return from his knee injury after the international break.

But the United manager’s selection problems pale in comparison to those troubling his City counterpart Manuel Pellegrini, who lost winger Raheem Sterling to a groin problem and goalkeeper Joe Hart to a calf injury.

Pellegrini estimated that both would be out for “three or four weeks”, which would rule them out of England’s forthcoming friendlies against Germany and the Netherlands and potentially next month’s two-legged Champions League quarter-final against Paris Saint-Germain as well.

City’s fourth defeat in six league games, and ninth in total, left them 15 points behind leaders Leicester City and they now have both United and West Ham United on their tail.

Pellegrini dismissed the suggestion that with Pep Guardiola’s arrival as his replacement now public knowledge, he has lost the ability to motivate his players.

“I don’t think I lose any control,” he said. “The attitude of the team today (Sunday) reflects that they are all involved with what we want to do.

“Of course it’s not the best way to finish the season, but I am happy with the attitude.”

He showed a flash of annoyance when he was asked why City’s current points tally -- 51 -- is so much lower than at the same stage of previous campaigns.

“Every season is different,” the Chilean told his inquisitor, who he accused of a “lack of respect”.

“I think we are talking in this press conference about the game we played against Manchester United. I can’t explain. Finished.

“If you have a (question) about the game, I answer you. If not, I don’t answer. You have all the right to ask what you want, I have all my right to answer what I want.”