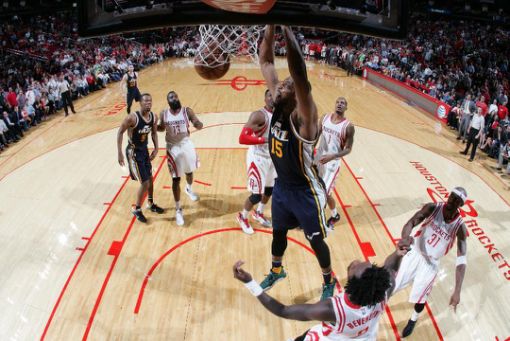 Derrick Favors #15 of the Utah Jazz dunks for the game winning basket against the Houston Rockets on March 23, 2016 at the Toyota Center in Houston, Texas. (Yahoo Sports Photo)

Kevin Love returned to the lineup and produced 24 points and 10 rebounds as the Cleveland Cavaliers beat the Milwaukee Bucks.

Giannis Antetokounmpo had 24 points, six rebounds and six assists for the Bucks, who lost their third straight. Greg Monroe had 14 points.

Love missed one game with a head and chest cold that bothered him for about a week and broke out of a shooting funk that plagued him since the All-Star break. He hit eight of 14 shots from the floor.

With Lowry a late scratch due to a sore right elbow, the Celtics built an 11-point lead late in the third quarter and then overcame their own scoreless run that lasted over six minutes.

Dennis Schroder scored 23 points, and Atlanta used a season-high 17 3-pointers to fuel a win over Washington.

Paul Millsap had 17 points and Kyle Korver made five 3-pointers for the Hawks, who kept pace in the Eastern Conference playoff race and exacted revenge after the Wizards opened the home-and-home set with a 117-102 win Monday in Atlanta.

Marcus Thornton scored 23 points and Markieff Morris had 19 for the Wizards, who saw their season-high, five-game winning streak end.

Andre Drummond powered for 30 points and 14 rebounds, and Detroit stretched its winning streak to four games by thumping Orlando.

Elfrid Payton recorded his third career triple-double and first of the season. He finished with 20 points, 10 rebounds and 10 assists for the Magic, who lost their five straight.

Derrick Favors converted a slam dunk with 1.6 seconds remaining as the Utah Jazz completed a come-from-behind, 89-87 win over the Houston Rockets.

Favors, who finished with 17 points and 15 rebounds, received a pass from Rodney Hood, took one step from the baseline and completed the comeback.

Gordon Hayward scored 22 points to pace the Jazz, while Shelvin Mack added 16, including a huge game-tying 3-pointer with 56.3 seconds left.

Karl-Anthony Towns gave his potential rookie-of-the-year campaign another boost on Wednesday, leading the way with 26 points on 11 of 17 shooting as the Minnesota Timberwolves snapped a two-game losing streak, beating the Sacramento Kings 113-104.

Andrew Wiggins and Zach LaVine both added 23 for the Wolves, who are well out of the playoff race, but look to be building toward a bright future with the play of young stars like that trio.

The Kings got 25 points from Rajon Rondo on 10 of 16 shooting, but have now lost four of their last five.

Rookie Kristaps Porzingis had 29 points and 10 rebounds, and Carmelo Anthony had 24 points and five assists to lead the New York Knicks to a 115-107 win against the Chicago Bulls.

Anthony missed New York's previous game against the Sacramento Kings with migraine headaches, but returned to help the Knicks (29-43) upset the Bulls (36-34).

Anthony and Porzingis combined for 17 points in the third quarter, when New York outscored Chicago 35-18 to extend a two-point halftime lead into a 92-73 margin starting the fourth.

Kawhi Leonard scored 32 points before being forced from the game with a quad injury, and the San Antonio Spurs rolled past the Miami Heat 112-88 to remain unbeaten at home.

Leonard left the floor midway through the third quarter and headed to the San Antonio locker room with a towel over his face.

He did not return, but he was not needed as the Spurs ran off an 18-4 in the first five minutes after he left and built their lead from 16 to 29 points during that stretch.

The Spurs (60-11) improved to 36-0 at the AT&T Centre, and they have also won a franchise-best 45 consecutive regular-season games at home since a loss to the Cleveland Cavaliers in March 2015.